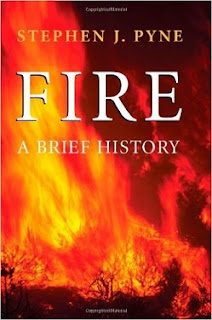 Posted by What Is Sustainable at 1:19 PM

We're still afraid of predators, but now they are on two legs and we don't seem to notice that. I'm watching the fires burning around LA in triple digit record-setting heat and smell the stench of over-population by a self-immolating species that can't or won't contain the dogs of hell it has unleashed. The planet roasts and people dance. Robinson Jeffers was right in his gloom: we are the most violent species. And, I would add, the most insecure and delusional as our egos tell us we are the masters of nature. Nature is proving us wrong. Our puniness is monumental.

One of your best reviews ever, Rich. Thank you so much.

6/21 3:30 PM PST. Ooops! I’ve updated my review. In the original, two sentences were misleading: “The fuel it consumes is fossil biomass that accumulated more than 300 million years ago, during the Carboniferous Period. These gigantic biomass deposits accumulated over the course of 60 million years.” This refers to coal only. Petroleum and natural gas are the result of very different processes and time periods. So sorry!

Thanks! After so many years of studying, I was surprised to discover how little I had appreciated fire as a powerful component of the human journey. You’re never too old to learn!

Predators is a rich subject. Throughout the human journey, we’ve gotten better and better at avoiding being eaten by big carnivores, by killing them by the millions. With our technology, we quit living like baboons and became apex predators. When we became overpopulated, infectious disease came to save us. But science has sharply reduced the toll of infectious diseases. Now, degenerative diseases have come to save us… and climate change, and water shortage, wrecked soils, and on and on.