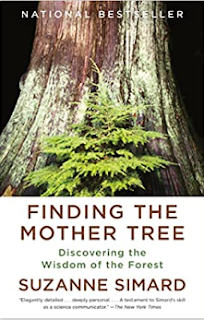 Suzanne Simard wrote an unforgettable book, Finding the Mother Tree.  She was born and raised in the rainforests of British Columbia, and is now a professor of forest ecology.  Her grandfather was a logger who worked back in the low-tech days, when the industry ran on manpower, horsepower, and waterpower.

At age 20, Simard’s first job was with a logging company.  By that time, the industry was using fossil powered machines — chainsaws, bulldozers, skidders, loaders, trucks, etc.  Selective cutting was being replaced by devastating clear-cuts.

At age 23, she was hired to do research for the British Columbia Forest Service.  They wanted to determine the most effective way to plant seedlings on a clear-cut site.  Government regulations required “free to grow” stocking.  So, prior to planting, herbicides were sprayed to exterminate natural plant life.  Only the moneymaking seedlings were free to grow.

In those days, much of what is now known about forest biology had not yet been discovered.  Consequently, standard industry practices were often based on a blind faith in unproven assumptions.  This wasted a lot of money, and unnecessarily damaged the ecosystem.  The most important business goal was to maximize short-term profits.

Simard preferred critical thinking to blind faith, and she asked questions that the good old boys never considered.  Vital clues can often be very hard to see.  She paid close attention to the incredibly intricate ways in which forests function.  “My instinct has always been to listen to what living things were saying.”

One of her assignments was to investigate a mysterious situation.  A number of clear-cut sites had been planted with seedlings, and none were healthy.  Plantation after plantation was dying.  She found that all of them had been planted exactly as the rules required.  Seedling roots had to be inserted in mineral soil (sand, silt, clay) because it retained more water and supposedly boosted survival.  Rules prohibited inserting seedling roots in humus.  Humus is a nutrient-rich component of topsoil in old growth forests.  It’s loaded with fungi, worms, bugs, and decomposed organic material.

Simard noticed that in the dying plantations, seedlings were failing to produce healthy root systems.  On the other hand, in nearby uncontrolled natural woodland, mature trees dropped seeds from which young trees sprouted.  The youngsters grew in humus, and they developed fantastically extensive root systems, intertwined with dense mats of yellow, white, and pink fungi.  This was a crucial discovery!

So, she created an experimental plantation.  Half of the seedlings were planted in mineral soil (all died), and the other half in humus (all thrived).  Ongoing research confirmed her suspicion that healthy fungi networks were essential for the survival of healthy forests.  Very important!

Industry traditions perceived that the fundamental force of nature was competition — survival of the fittest.  So, industrial forestry was a game of nurturing the most valuable trees, and obliterating everything else.  The downside of this belief was that it was remarkably counterproductive in the real world.

Industry traditions believed that low value alders could reduce the vitality of high value lodgepole pines.  So, alders were chopped down.  Actually, pines loved alder, because alders transformed nitrogen into ammonium, a potent fertilizer that pine roots absorbed via the fungal networks.  Pines not growing near alders were more vulnerable to pine beetles that bored into their bark.  A fungus carried on beetle legs infected the pines, and it prevented water from flowing upward in the trees.  Countless pines died of thirst.

Industry traditions declared birches to be low value junk trees, because they were thought to slow the growth of high value Douglas firs.  Large birch leaves performed more photosynthesis than fir needles, so they were able to convert more sunbeam energy into chemical energy — sugar and other carbs.  As birch foliage expanded, fewer sunbeams could reach the firs.

Birches stored surplus carbs in their roots, where networks of fungi allowed fir trees to tap into it.  The more shade the birch cast, the more sugar it shared with the fir.  Simard eventually realized that this relationship was not a problem.  It was beneficial.  They were working together, like a system.  Healthy birches promoted healthy firs.

She wrote, “Fir can’t survive without birch due to the high risk of infection from Armillaria, and birch can’t survive in the long run without fir because too much nitrogen would accumulate in the soil, causing the soil to acidify.”  When firs are grown alone, up to a third are killed by a root disease.

In one experiment, Simard grew birch and fir trees together in some stands.  In other stands, firs were grown without birches.  Twenty-one years later, the forest where birch and fir had been grown together had almost twice the productivity of stands with no birches.

The findings of Simard’s research inspired doubts about the validity of some traditions.  She began to suspect that the real life force of forest ecosystems was more like cooperation.  Over time, diverse communities of forest dwelling species apparently coevolved ways of establishing mutually beneficial win/win relationships.  Year after year, her experiments confirmed these suspicions.

She suspected that networks of fungi played a major role in this magic act.  Seeking evidence, she designed experiments to discover how nutrients and moisture were transferred from one tree to another.  This involved using carbon isotopes as tracers, unique identification tags.

The C-12 isotope is natural, C-13 is unnatural but not radioactive, and C-14 is unnatural and radioactive.  Simard inserted C-14 into birch leaves, expecting to find that it flowed into Douglas firs.  It did!  She inserted C-13 into the firs to see if nutrients also flowed from fir to birch.  They did!

When trees are able to intermingle with neighboring trees, they develop lots of beneficial fungi interconnections.  There may be more than 100 species of fungi in a forest.  Some retrieve phosphorus from humus.  Others retrieve nitrogen from decaying wood.  Some carry water.  Others send or receive sugar.  The function of most fungi is unknown.

Simard found that giant trees played an especially important role in healthy forests.  She called them Mother Trees because they nurtured others.  Fires generally roasted understory vegetation, while the taller overstory trees were more likely to survive.  Their bigger crowns captured more sunbeams and produced more carbs.  Larger trees shared their surplus carbs with nearby smaller trees, including those of other species.  Young trees might grow for decades in the shadows.

Some of the seeds dropped by Mother Trees remain nearby, germinate, and emerge as young trees.  Mothers seem to recognize their genetic offspring, and give them top priority when sharing nutrients.  Unrelated trees, and trees of different species, also receive gifts from Mother Trees.  There seemed to be something like tree to tree communication.  Simard studied a stand of Douglas fir.  Fungi networks connected the older trees to all of the younger trees around them.  Some were as far as 20 meters away (22 yards).

Simard’s book is a chatty discussion of her life, work, and family.  Its target audience is forestry students, and industry professionals.  Her unconventional ideas remained controversial for a number of years.  Today, her work has been peer reviewed, and is widely accepted.

General readers (like me) will stumble into the unfamiliar names of many plant and fungi species.  I didn’t know the meanings of “mycorrhiza” and “mycelium.”  Both are important categories of fungi species.

The relationship between mycorrhizal fungi and living trees enabled the survival of both.  Fungi contributed water and soil nutrients to the tree roots.  In return, tree roots provided the fungi with carbs produced by photosynthesis.

Peter Wohlleben fondly described mycelium, the largest living organisms yet discovered.  One in Oregon weighs 660 tons, covers 2,000 acres (800 ha), and is 2,400 years old.  They provide trees with water, nitrogen, and phosphorus — in exchange for sugar and other carbs.

Around the world today, relentless industrial scale forest mining is causing far more catastrophic destruction than ever before.  The global economy has no plans to slam on the brakes.  Humankind demands unlimited lumber, paper products, firewood, etc.  We will eventually win the War on Forests — an idiotic Pyrrhic victory.  My short overview on the history of deforestation is HERE.

Posted by What Is Sustainable at 1:10 PM 0 comments