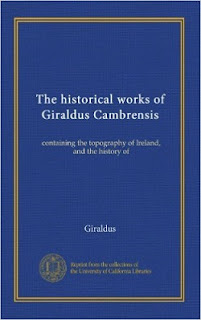 One grouchy grumpy day, Pope Adrian IV got honked off at Ireland.  The Irish were not paying their tithes, and they were Catholic in name only, living in abominable moral decay.  So, he ordered England’s Henry II to conquer the rowdy heathen barbarians.  Along with the invasion went a secretary, Giraldus Cambrensis (1146 – 1223), a Welsh priest and scholar.  (“Giraldus Cambrensis” was Latin for “Jerry of Wales.”)  Father Jerry arrived in Ireland in 1185, and wrote a description of the emerald isle, Topography of Ireland.  It captured a rare snapshot of what life was like more than eight centuries ago, when the Irish were still tribal people.


At that time, Ireland was a remote and isolated frontier, largely off the radar of civilization.  The landscape majored in forests, bogs, lakes, streams, and swamps.  Boats were the easiest mode of travel.  Stags feasted on the lavish banquet of foliage, becoming chubby and less speedy.  Wolves dined on the abundant boars and wild pigs.  The air and water were clean, and the rivers were loaded with fine salmon, trout, muddy eels, and oily shad.


The tribes of Ireland were wild chiefdoms, and the lads and lasses were primarily cowboys and cowgirls.  The climate was mild, rainfall was gentle and abundant, and the grass was green all year.  Snows were rare, and soon melted away.  It was a paradise for herbivores and herders.  Herders needed no structures to protect the livestock from the cold, and they had no need for cutting, drying, and storing hay.  Organic milk, grass-fed meat, wild fish, and little else, were on the menu every day of the year.


The wild folks had no interest in adapting the latest European fashions — dainty, frilly, colorful attire.  They refused to invest endless hours in the tedious drudgery of spinning and weaving fabric of flax or wool.  Sensible people are not trend junkies, and dressing up in silly duds made you look like a goofy geek from Liverpool.  It was simply too embarrassing.  Sensible people wore skins and furs, which were comfortable, durable, attractive, and suitable for all occasions.


There were veins of ores, including gold-bearing quartz, but the cowboys ignored them.  Mining was brutally hard work, and their cattle refused to eat gold.  Their lands were home to majestic forests, but the cowboys weren’t interested in forest mining.  They had no need for lumber or paper, and their finicky cattle would eat neither boards nor money.  A good deal of the countryside was potentially suitable for use as cropland, but very little was tilled and sown.  Cowboys knew that soil mining was miserable, backbreaking work, and their traditional way of life worked just fine.  Cattle were perfectly happy to eat the delicious grass.


Tribes had abundant leisure time for making a joyful noise.  Father Jerry had travelled as far as Rome, and he considered the Irish to be the finest musicians of all.  Irish music was lively and rapid, and the harmonies sweet and gay.  They mostly played the harp and tabor (a small drum).  In those days, music was still genuinely sustainable.  Musicians did not need huge tour buses, or dozens semis to haul speakers, amplifiers, lighting systems, stages, mega-screens, and dumpsters of cocaine and heroin.


The people were strong and healthy.  They did not waste years in lingering sickness and decline.  They preferred to leap directly from good health to their deathbeds, and promptly get it over with.  They did not know the days of the week, the names of the months, or what year it was.  They kept time by the sun, moon, and seasons.


The Irish have never been fond of Father Jerry’s writing, because he was an obnoxious gaseous sphincter.  For example, “The Irish are a rude people, subsisting on the produce of their cattle only, and living themselves like beasts.”  Or, “This people, then, is truly barbarous, being not only barbarous in their dress, but suffering their hair and beards to grow enormously in an uncouth manner… indeed, all of their habits are barbarisms.”


Father Jerry was certain that the world was very old, close to its end.  He was stunned and perplexed by the Irish indifference to salvation and eternal life.  You see, Saint Patrick had successfully converted all the tribes before he died in 485.  Yet seven centuries later, most of the Irish savages had forgotten everything about sin, damnation, and guilt.  Many Irish remained unbaptized and unmarried — shameless, adulterous, incestuous, illegitimate bastards.  (Writer Michael Ventura heard of an Irish grandmother who, in the 1950s, still referred to Christianity as “the new religion.”)


Anyway, King Henry’s invasion of Ireland was the kickoff for centuries of bloodshed — similar in many ways to English colonization of New England or Australia.  The Irish were low-tech guerilla warriors, skilled at hit and run ambushes.  They used slings to hurl stones with skull-splitting accuracy.  They had spears, javelins, and axes.  The English were state-of-the-art warriors, having chain mail, armor, archers, and deadly swords.  For example, “He who had seen how John de Courcy wielded his sword, with one stroke lopping off heads, and with another arms, must needs have commended him for a most valiant soldier.”


Long after Jerry’s death, after more than 450 years of fighting, the conquest was complete.  The English victors seized the estates of Irish nobles, and gave them two options.  They could move to a reservation, or be executed.  Thousands of Irish women were sold to the owners of Caribbean sugar plantations.  Countless lads were hung.  One observer noted, “You may ride 20 miles and discern anything or fix your eye upon any object, but dead men hanging on trees and gibbets.”


History is clear that civilization trumps tribes.  It also trumps healthy wild ecosystems.  It trumps the wellbeing of generations yet to be born.  But even before Henry and Jerry washed up on shore, tribal Ireland was not a place of love, peace, and happiness.  Ireland was divided into many túatha, or petty kingdoms, the domains of chiefdoms.  The borders often fluctuated, as chiefs ambitiously pursued the glories of perpetual growth.


History is clear that the accumulation of property, including domesticated livestock, is a routine cause of wealth inequality, social friction, and war.  Before becoming cowboys, the Irish hunted and fished.  They could not capture and hoard wild stags or boars, so they avoided status-seeking mania, and the dark juju of bossy rich jerks.  Countless millions have perished in countless wars resulting from the insatiable obsession of insecure people for more, more, and more.  Today, many blame our woes on capitalism, but the roots of the monster are far deeper.


Father Jerry wrote with flamboyance.  The translation I read was clear and understandable.  However, he was not skilled at remaining focused on his subject, and frequently wandered away to jabber about whatever came into his head.  He wrote many books, including The History of the Conquest of Ireland.  The Historical Works of Giraldus Cambrensis contains both of his books on Ireland, and his two books on Wales.  A free download is HERE.


Bonus link: Traces of the Elder Faiths of Ireland.
Posted by What Is Sustainable at 12:20 PM

Interesting stuff Rick, thanks. I've been hearing a lot about how old Ireland had some very good attributes we'd do well to consider in replacing our current stupid "system",

This was entertaining, an interesting assault on western culture

Hi Henry! While writing this review, I also referred to The Story of Ireland. The cover shows the Irish countryside -- grass and stone walls as far as the eye can see. No trace of the ancient rainforest. It's heartbreaking!

"The people were strong and healthy. They did not waste years in lingering sickness and decline. They preferred to leap directly from good health to their deathbeds, and promptly get it over with."

Do people know anymore what it feels like to be fully alive? Most are just hanging around in a chemically and digitally induced kind of suspension between life and death.