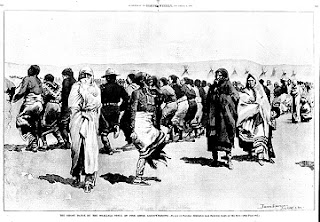 
I’ve been reading John Tanner’s autobiography, The Falcon, (Download).  He was born in Kentucky in 1780.  At age 9, he was kidnapped by the Ojibwa, and adopted by an Ottawa chief.  Tanner spent 30 years living as a wild hunter-gatherer, wandering in the wilderness between the Red River of North Dakota and Lake Huron in Michigan.  He once tried to return to his birth family, but white society was intolerably creepy.


One day on the prairie, he met an odd fellow.  The stranger brought news of a Shawnee prophet who had a vision for a great healing.  Ever since the disease ridden, pale faced, radicalized Christian terrorists had washed up on the shores of Turtle Island, life had gotten ugly for Native Americans.  The terrorists, who seemed incapable of honesty, kept pushing the tribes westward, generating much tension and bloodshed.  At that time, the Sioux of the plains were pushing back hard against the unwanted immigrants displaced from their traditional lands in the east.  Nobody was happy.


Tanner listened to the prophet’s list of instructions.  Never allow your fire go out.  Let no dogs live.  Never steal, lie, strike others, get drunk, or go against your enemies.  If you follow these instructions, you will become invisible to the Sioux, and can live in peace.  A flashback slithered into my boggy old thinker.  This story sounded familiar.  Computer magic remembered my notes on Alvin Josephy’s book, 500 Nations, pages 305-306.  Bingo!  They read:


305 In Indiana in 1805, Lalawthika (the noise maker), an alcoholic brother of the heroic warrior Tecumseh, fell into a trance, and visited with the Creator in a vision.  306 He quit drinking and changed his name to Tenskwatawa, meaning “the open door.”  He was later known as the Prophet.  He preached to many tribes about declining morals and the need to return to traditional values.  They needed to reject Christianity and return to their old religion.  They should drop the selfishness, envy, and lust for possessions that the whites had taught them, and return to the way of sharing.  They should cast out of their lives domestic animals, woven clothes, and metal tools.


Upon reading this, a name farted out of my boggy old thinker: Donald Trump.  I was startled at this weird association, and then burst into a big smile.  This led to another flashback, a passage on the Ghost Dance I had written for What Is Sustainable.  Here’s a bit of it:


In the 1860’s, deranged Europeans rode their brand new railroads into the Great Plains and commenced the Buffalo Holocaust.  By 1890, the buffalo were at the brink of extinction.  For the Indians, the buffalo were the core of their existence.  With the buffalo gone, their traditional hunting life became obsolete and impossible.


In January 1889, a Paiute prophet named Wovoka had a vision.  He encouraged folks to perform the Ghost Dance.  They should gather and dance five days and four nights, then on the fifth day bathe in the river.  It was powerful dancing, with up to 500 in a large circle.  Many enjoyed manic frenzy, some fell into hypnotic trances, some collapsed and became unconscious.  The Ghost Dancing spread from tribe to tribe, eventually expanding over a vast region of the American west.


The vision was that if the Ghost Dance was properly performed, a great flood would come and wash the whites back across the ocean to their European home, where they belonged.  The ancestors and the buffalo would be reincarnated, the epidemics of white diseases would cease, and life would return to the good old days.


A different version of the Ghost Dance story, described by Lame Deer, used the metaphor of rolling up and disposing a filthy old carpet, which was a symbol for the white man’s world.  Imbedded in the filthy carpet were roads, mines, cities, farms, factories — every form of ugliness that civilization brought with it.  When the old carpet was rolled away, beneath it was revealed a healthy wild Fairyland — the land as it was prior to the invasion of the whites and their diseases.


The Ghost Dance became so popular that the white invaders began to get spooked.  They were intimidated by the fact that large numbers of Indians were enthusiastically dancing, with the goal of cleansing their lands of the white race forever.  They perceived (incorrectly) that the natives were conspiring to launch a violent rebellion.  The army was called, and several hundred Ghost Dancers were exterminated at Wounded Knee on December 29, 1890.


This story spurred the recall of another memory, an old rant on the vision of Nongqawuse, in South Africa.  Some snips:


When the Dutch Afrikaners (Boers) invaded the Eastern Cape region of South Africa, the Xhosa tribe fought them long and hard.  Beginning in 1779, eight bloody frontier wars were fought.  In 1806, the British replaced the Afrikaners and continued the struggle to conquer Xhosa land.  In 1853, a lung disease began killing off the Xhosa’s cattle herds.  Problems worsened when a severe drought hit.  Things started looking grim.


Then, in 1856, after decades of terrible struggles and misfortunes, an 11-year old Xhosa girl named Nongqawuse had a vision.  She communicated with spirits of the dead and they informed her that the colonist invasion was the result of their cattle having been cursed by witchcraft.  The spirits then gave her some important instructions in order to remedy this situation.


To lift this curse and return to days of peace and plenty, the living Xhosa had to do three things:  stop cultivating their fields, destroy their grain reserves, and kill all of their cattle.  If they did this, the whites would be driven into the sea, the dead would return, and they would refill the granaries, restore the crops in the fields, and bring herds of immortal cattle.


At this point, the Xhosa split into two groups, the believers and the non-believers.  In 1856 and 1857, the believers did as the ancestors instructed them.  They dumped their grain and slaughtered 400,000 cattle.  Having destroyed their food supply, tens of thousands then proceeded to die of starvation.  Tens of thousands were forced to go to towns and take oppressive low-paying jobs.  Only 37,000 remained on their lands, out of 105,000.  By the 1870s, white settlers occupied most of the Xhosa’s lands.  The surviving Xhosa were rounded up and moved to reserves in British Kaffraria.


Anyway, these stories emerged from cultures whose good old days were behind them, following bloody collisions with civilization.  The present was out of balance, miserable, a dead end.  It was time to perform big ceremonial magic, return to the traditional path, and live in peace and prosperity.


As I write in early 2017, Donald Trump is the new U.S. president.  His mantra is “Make America Great Again.”  It’s time for Americans to perform the Trump Dance, and restore the good old days of cheap and abundant oil, coal, iron, and timber, when men had good jobs, mothers stayed home to raise large families, minorities knew their place, and Kennedys boogied in the White House.


This time, it will work, by golly!


Image: “The Ghost Dance by the Oglala Lakota at Pine Ridge.”  Illustration by Frederic Remington, 1890.
Posted by What Is Sustainable at 2:44 PM

Another good one, Richard. I am starting to dance and trance right now.

Wow! The lights went out in Oregon, and all the cars stopped in their tracks!

This is a gem!! You've made some FABULOUS connections where civilization overruns indigenous people. Speaking of connections, I wonder whether the water protectors at DAPL are, in part, re-enacting a ghost dance?

Hi Janaia! Thanks! On December 28, 2000, the venerable archdruid, John Michael Greer posted a note about the Ghost Dance on RunningOnEmpty. He noted that he had Lakota ancestors. Lakota culture was extremely incompatible with the culture of the colonists. Their options did not include any realistic way of blowing the terrorists to smithereens, and returning to the traditional path. They chose the Ghost Dance option.

Greer wrote, “It's important not to misunderstand what was going on here. The Lakota were relying on a familiar cultural resource, which (in Wasi'chu language) we might as well call magic. Magic is severely underrated as a technology. It may not do much to the physical world, but it has very powerful, proven effects on how people think, act, and experience the world.” (I think Trump’s election was an amazing act of magic.) They danced to Wounded Knee. We’re dancing to Helter Skelter.

“This sort of thinking — using the old strategies to face new challenges, even when the former are hopelessly inadequate for the latter — is very common. There's a sociological classic titled ‘When Prophecy Fails’, by Leon Festinger et al., that shows how the failure of a model actually makes people cling to the model even harder. It's easier to deny the evidence of your senses, in other words, than it is to admit that you were wrong.”

Industrial society is performing its own Ghost Dance, as reserves of sequestered carbon have become very expensive to extract. We’re going the Drill Baby Drill Dance, the Solar Panel Dance, and so on. Greer wrote, “These are the modern, technologically up-to-date equivalents of Wovoka's visions. They all insist that things can be exactly the way they once were, if we just use our familiar cultural tools (in this case, our science and technology) in the ritually correct way.” We’ll dance and dance until we are mowed down by our own Wounded Knee.

Therefore, “The problem is that all the construction projects in the world can't get away from the fact that infinite growth on a finite (and rather small) planet is a guaranteed recipe for disaster. Unless we deal with that, abandon a growth-based way of life, and rein in our lifestyles to the point that they can be supported on sustainable resources, nothing we do is going to make much difference.”

“But people aren't likely to see that. The more the current pro-growth, pro-wasting-energy worldview is disproved by events, the more desperately people will cling to it, and the more effort they'll put into trying to dance the oil wells back. It's tragic and rather stupid, but it's also very human.”