Hunters of the Recent Past 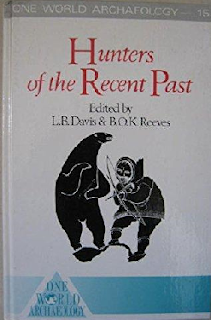 
When I hear the word “hunter,” I immediately conjure an image of a man with a gun.  Other images follow — bows and arrows, mounted hunters, cavemen with spears, and so on.  Hunters of the Recent Past provided me with much new information on how the ancestors lived, prior to horses, guns, and other industrial gizmos.  The book is a collection of 19 scholarly papers that describe modes of low-tech communal hunting that were common during the last 8,000 years or so.


Evolution fine-tuned our species for life on tropical savannahs.  In a hot climate, meat spoils quickly, so hunting was only done to satisfy immediate needs.  Tropical folks could survive without fire and clever technology.  On the other hand, in temperate and subarctic climates, the buffet of food resources was less generous.  In many regions, survival through long winters was impossible without having fire, warm shelter, fur clothing, and substantial amounts of stored food.


On the western plains of North America, a common method of communal hunting was driving herds of buffalo off cliffs.  White folks called these killing sites buffalo jumps, the Blackfeet called them pishkuns.  Pishkuns were scattered from Canada to Mexico.  There were more than 300 in Montana alone.  For thousands of years, prior to horses and guns, this was a primary method for hunting buffalo.  At the First Peoples Buffalo Jump State Park in Montana, many layers of buffalo bones are found beneath the cliff — literally millions of bones.


When scouts observed a herd moving into the vicinity of a pishkun, hunters moved to appropriate locations, and became noisy and animated.  The herd panicked and ran away from them, moving into drive lanes that funneled the herd to the brink of doom.  Brave teenage buffalo runners, camouflaged in buffalo hides, led the animals toward the cliff.  The runners would disappear over the edge, but safely land on a ledge below, whilst the surprised buffalos flew over them, and plummeted to the rocks below, where butchers waited.  (Read THIS.)


The Head-Smashed-In Buffalo Jump is in southwest Alberta.  It utilized one of the longest and most complex drive structures on the plains.  Natives constructed drive lanes that reached up to 6 miles (10 km) into the gathering basin.  They followed the contours of the land, to help the flow of animals move as smoothly as possible.  The bone deposits at the bottom are 39 feet deep (12 m).  This pishkun was in use by at least 6,000 years ago.  (Read THIS.)


In the journal of the Lewis and Clark Expedition, Lewis noted that on May 29, 1805 they discovered the rotting carcasses of about 100 buffalo at the bottom of a cliff, as well as great numbers of well-fed wolves that were “very gentle.”  For amusement, Clark felt inspired to shoot one of the blissed out wolves.


There were two primary seasons for communal hunting, springtime and late autumn/early winter.  In spring, little stored food was left.  Buffalo still had heavy winter coats, excellent for making warm clothing.  In the fall, animals had fattened up for the long cold winter, and fat was cherished.  Animals with minimal fat were junk food, or dog food, or left to rot.


Reindeer live in northern Eurasia, and caribou live in Greenland, Canada, and Alaska.  The two creatures are the same species (Rangifer tarandus), but there are nine subspecies, like tundra reindeer, woodland reindeer, tundra caribou, woodland caribou, etc.  Several are now endangered.  The species is unique in that both sexes grow antlers.


All around the Arctic Circle, reindeer and caribou have been hunted for thousands of years.  They provide meat, sinew for sewing, bone for needles and awls, antler for tools, fat for light, heating, and nourishment, and hides for bags, snares, clothes, and tents.  They make survival possible.


Every spring and fall, herds made seasonal migrations along traditional routes.  Hunters knew when and where to expect them.  These routes often had bottlenecks that concentrated the herds, ideal locations for hunting.  Commonly, groups of hunters would drive the herds into killing places.  To direct the movement of a herd, drive lanes included barriers — log fences, brush fences, snow drifts, rock cairns.  Some locations had corrals of wood or stone to capture the herd.  In Siberia, animals were driven into nets.


Herds were driven into deep snow and then lanced or shot with arrows.  In Greenland, caribou were driven off cliffs.  Some hunters used snares, open loops suspended from branches, to grab animals by their necks or antlers.  Snares were placed along game trails, where animals voluntarily moved, or scattered along drive lanes where hunters or dogs aggressively drove them.  Records from 250 years ago report that near Churchill, Manitoba, caribou herds were driven into corrals that were one mile (1.6 km) in diameter, and 350 to 600 people participated in the kill.


The easiest method, where possible, was to drive the herd into streams or lakes, where they were lanced by hunters in canoes or kayaks.  Two hundred animals could be taken in a few hours.  During a two-week summer hunt on Lake Mistinipi, hunters speared 1,200 to 1,500 caribou.  One Copper Inuit settlement, inhabited between 1500 and 1700, was located close to a caribou migration route.  During two centuries, an estimated 100,000 caribou were driven into the lake and killed.


Lads in canoes did not always stop killing when they had all the meat they needed.  In a frenzy, they killed as many caribou as they could, the entire herd, if possible.  It was a great pleasure to kill so easily, many months since the last migration.  Near Hudson Bay, an observer in the 1890s found hundreds of carcasses left to rot — overkill.


In Scotland, Norway, Sweden, and Finland, many thousands of pit traps were dug in migration routes to catch reindeer.  Animals could be driven into the pits during their outbound and inbound migrations.  In southern Norway, trapping pits were used as early as 11,000 years ago.  HERE are examples of snares and traps used in Stone Age Finland.  HERE are photos of recreations of a settlement in Stone Age Finland.


Caribou herds had been following traditional migration routes for 8,000 years or more.  Indians and Inuit built permanent settlements along the routes.  In the nineteenth century, when hunters began using repeating rifles, animals could be killed from farther away, requiring less stalking skill.  The caribou harvest sharply increased.  Before long, herds abandoned traditional routes, communities starved, and their settlements went extinct — an unintended consequence of progress.


The book also discusses communal hunting for pronghorn antelope, mountain sheep (bighorns), mammoths and mastodons, moas, guanacos, and others.  It’s a mother lode of information.  The writing is scholarly — terse and compact — but not bewildering techno jargon gibberish.


Compared to the good old days in mother Africa, it was far more difficult for tropical primates to survive in cool climates.  The selection of kill sites, and the construction of drive lanes, corrals, and pit traps was a major effort.  On the days of mass kills, large numbers of people were required for success.  Preserving meat and hides took weeks of work.


Communal hunting required teamwork, planning, and extensive knowledge of the landscape, the behavior of animals, and basic survival.  Over time, it contributed to the extinction of mammoths, mastodons, and moas.  By the 1930s, mountain sheep were nearly gone.  With the arrival of guns, horses, traders, snowmobiles, ranchers, loggers, miners, diseases, and genocidal maniacs, the herds of buffalo, caribou, and reindeer have been sharply reduced.


In another review (HERE), we learned that the persistence hunters of the Kalahari, and their hominid predecessors, remained extremely low tech for two million years or more.  The civilized people who have waged full-scale war on wildlife are all descendants of persistence hunters.  Technological innovation is demonically addictive, new gizmos replacing old, in an accelerating downward spiral.  Cultures bewitched with cleverness gallop down the drive lanes, faster and faster and faster, destined for the bloody bone beds below — big brains and all.  There are other paths.

Very interesting all around, but especially to see the two reports of animals left to rot. I'm so used to the romanticized image of indigenous people not wasting anything. Probably an unrealistic image. Thanks for the review!

That buffaloes drowned in great numbers cannot be doubted; John McDonnell, a North West Company trader, counted over 7,000 one day in 1795 on the Qu’Appelle River. Charles McKenzie wrote that the Mandan drove “large herds” onto the weakest sections of winter ice on the Missouri, where they fell through, drowned, and were subsequently recovered downstream and left to “take flavor.” Some Indians preferred drowned buffaloes over all other types of food. McKenzie wrote, “When the skin is raised you will see the flesh of a greenish hue, and ready to become alive at the least exposure to the sun; and is so ripe, so tender, that very little boiling is required.” Bottle-green soup made from it was “reckoned delicious,” and the Mandan were so fond of “putrid meat” that they buried animals all winter and ate them in spring.

But on other occasions, people did not use all the meat from the buffaloes they killed. In 1793, Fidler left one Piegan pound “quite full laying 5 or 6 deep one upon the other, all thro which in the whole was above 250 Buffalo.” He added that “when the Wind happened to blow from the Pound in the direction of the Tents, there was an intollerable stench of the great number of putrified carcasses.” In 1804, Meriwether Lewis saw “the remains of a vast many mangled carcases of Buffalow which had been driven over a precipice of 120 feet by the Indians and perished; the water appeared to have washed away a part of this immence pile of slaughter and still there remained the fragments of at least a hundred carcases.” The following year, the Mandan killed “whole droves” of buffaloes and took only “the best parts of the meat,” leaving the rest “to rot in the field.” The trader Alexander Henry saw “mangled carcasses strewn about” in a Blackfeet pound in December 1809. The “bulls were mostly entire,” Henry reported, “none but the good cows having been cut up,” and the stench “was great.”