The Last of the Nomads 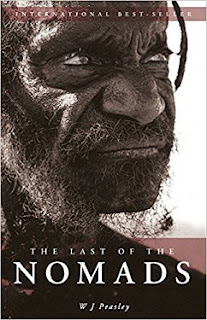 
Ladies and gentlemen, I would like to introduce you to Yatungka and her husband Warri, the last two Mandildjara people to live in the traditional way on the Western Gibson Desert of Australia.  William Peasley wrote their saga in The Last of the Nomads.


Aborigines have one of the oldest continuous cultures on Earth.  They have lived in Australia for at least 40,000 years, some say 60,000.  Nomads first inhabited the more fertile regions, leaving the deserts for later.  Folks have lived in the Gibson for maybe 20,000 years.  Most readers, if dropped off in the Gibson, naked, with a spear and boomerang, would be dead in a day or three.  Water is extremely scarce.  For the paleface colonizers, the desert is dangerous, miserable, a land of horrors.  For Aborigines, it was home sweet home, where they belonged, a sacred place.  They had an intimate understanding of the land, and learned how to live in balance with it.


Yatungka and Warri spent most of their adult lives as pariahs, because their relationship violated a tribal law that defined permitted and forbidden marriages.  Laws were taken very seriously.  If they returned to their people, they might be beaten, or even killed.  So, their family lived away from the tribe, wandering from waterhole to waterhole, hunting and foraging.


In the 1950s and 1960s, the government made efforts to move the Aborigines into settlements, where intense culture shock led many to lose their identity, become massively depressed alcoholics, and abandon their ancient traditions.  The sons and kinfolk who stayed with Yatungka and Warri eventually moved off to civilization, but the outlaw couple feared to join them.


Anyway, in 1977, it was the third year of an extreme drought, the worst in a century, maybe the worst in many centuries.  The kinfolk of the outlaw couple were worried about them.  Mudjon was a respected elder who had been raised on the desert in the traditional way.  He knew all the waterholes, and cared about Yatungka and Warri.  His dream was to take the Mandildjara people back to their desert paradise, return to the old ways, and preserve their traditions.  Few of the young were interested.


Mudjon asked a white friend to help him search for the couple, and he agreed.  Mudjon was joined by five white lads, including Peasley.  They loaded up three vehicles and took off across the vast roadless desert.  Mudjon knew that this was probably his last visit to the territory of his people, and the last time a traditional Aborigine would drink from each well, or leave footprints in the dirt.  Peasley noted, “It was very sad for him to move through the land where once his people hunted and laughed and sang around the campfires.”


The chapters describing the long search contain some fascinating passages about the old way of life.  Mudjon was a master at reading the land, noticing the countless slight details that provided strong and detailed messages to him, but were invisible to the whites.  Without a map for the 1,500 km (932 mi) journey, he guided the team from waterhole to waterhole, looking for signs of the couple.  It was a powerful experience for him, to see old campsites, windbreaks, caves, springs, rock paintings, and other artifacts — the remains of an ancient culture.


Eventually they found signs of the missing couple.  At several locations, Mudjon started a brushfire that sent smoke high into the sky, where it would have been visible from up to 160 km (99 mi) away.  Warri did not respond with a smoke signal.


It was an ancient custom of the desert people to routinely light brushfires as they journeyed from waterhole to waterhole.  This had three benefits.  (1) Fire flushed out hidden game.  (2) It signaled their progress to other groups.  (3) It regenerated the earth and stimulated plant growth.  Fresh green sprouts attracted game.  Wildlife became dependent on burning.  This was called firestick farming.  In recent decades, in regions no longer visited, the burning has ceased, the water holes are not kept cleared, and animal and bird life largely disappeared.


One happy day, they saw smoke from Warri, and drove to his campsite.  When Mudjon greeted him, there were no smiles, hugs, or handshakes.  Warri was about 150 cm (5 ft) tall, naked, extremely thin, and both eyes were inflamed.  He wasn’t strong enough to hunt, so they were living on quandongs (peach-like fruit).  Yatungka returned from foraging with several dingo dogs.  She displayed no signs of excitement.  She was about 165 cm (5’ 5”) tall, younger, naked, very thin, but in much better physical condition.


They would not survive much longer at the waterhole.  The rescue party knew that the nearest well that still had some water was 150 km (93 mi) away, an impossible journey on foot.  The couple agreed to return to the Wiluna settlement with Mudjon and company.  They wanted to see their sons again.  Mudjon assured them that there would be no drama about the taboo violated long ago.


In Wiluna, many folks came to look at the long-missing couple, and were stunned to see their emaciated condition.  “There were no greetings, no shouts of joy, in fact there was no sign of recognition on either side, and yet the sons of Warri and Yatungka were within a few meters of their parents.”  Tears streamed down the cheeks of Warri and many others.  A few months later, Mudjon got very sick, declined, and died.  A year after their return, Warri and Yatungka caught a disease.  He died in April 1979, and she died a few weeks later.


For me, this was a powerful book, not primarily for what it said, but for the silent message unperceived by the white heroes who came to the rescue.  Peasley spent his boyhood on a farm in Australia, and he sometimes discovered signs of prehistoric campsites.  He felt sad that, after more than 40,000 years on the land, the people had not been able to leave behind anything more significant than simple campsites, grinding stones, rock paintings, and so on.


For me, this low impact living was an amazing achievement.  They successfully adapted to a hot dry ecosystem, and it was a wonderful home for them.  What a terrible problem!  The Gibson Desert that the rescue party drove across looked nearly the same as it did 1,000 years ago, or 10,000.  The silent message screams “genuine sustainability, beautiful, healthy culture!”


Humans are also capable of adapting to godforsaken nightmares like Chicago, jammed together with millions of isolated, anxious, stressed out, depressed strangers… ah, the wonders of progress!  The rescue party was proud of their advanced technology, which gave them the ability to dominate, exploit, and rubbish the continent.  What significant artifacts will they leave behind to impress the youngsters of generations yet to be born?  Will the land be in no worse condition in another 1,000 or 10,000 years?  These questions are taboo, heresy in a culture whose god-word is Growth.


Peasley did confess to having some uncomfortable thoughts.  When the rescue party knew that the couple was alive and nearby, he realized, “We were about to intrude into the lives of the last nomadic people in the Western Gibson Desert, and in doing so, it was possible that we might be responsible for bringing to an end a way of life that had gone on for several thousand years.”


The Last Nomads is a 45 minute Australian documentary of this story.


The Future Eaters provides an environmental history of wild Australia, the early human impacts, the mass extinctions, and the lessons painfully learned.


The Life and Adventures of William Buckley tells the story of an Englishman who abandoned civilization and spent 32 years as a hunter-gatherer in the early days of Australian colonization.
Posted by What Is Sustainable at 2:28 PM

I was going to recommend the future eaters to you, but it appears you've already read it. I found the last of the nomads very sad. The last of the nomads were actually the pintupi 9 who came out of the desert in 1983 (I think). There are a few interesting articles about them on the web which may interest you.

Are you familiar with the story of Truganini? The plight of the Tasmanian aborigines is nothing short of horrific. I'm in the in the process of reading "Friendly mission : The Tasmanian journals of George Augustus Robinson 1829 to 1834". Not sure if you could get your hands on it but I have no doubt you would find it up your ally.

Hunter gatherers subsist and survive, but leaving nothing behind for the future. With no written language, they leave no sustainable record. In Danish prehistory the sone age peoples hunted until they exhausrted the available prey to sustain their growing population and had to turn to cattle raisig and farming. But even they left behind no written records. Written language goes back only about 5000 years in the form of Chinese and Aramaic/Hebrew. The Hebrfew produced the Hebrew Scriptures, adopted by Christians as the "Old" Testament. Huntere gatherer is subsistence but no more. Humans kill off the large animals, work their way down. So no more mastodons. It's not idyllic, but then neither is Chicago.

Hi Harley! Hope you’re breathing easier after the weeks of wildfire. No other animals leave anything behind for the future besides compost. Humans are just 200,000 years old, or so. Most other species go back much further. We are animals. This is an important philosophical question for our age — is it more intelligent to live sustainably, and leave nothing behind, or is it more intelligent to leave a wrecked planet? Knowingly choosing the path to self-destruction does not seem to be our best choice. Animals can live just fine without scriptures, or even the brilliant writings of you and I.

As for Friendly Mission, the university here doesn’t have it, nor does Amazon. It’s out of print, 50 years old, and probably far out of my price range. AND… it’s 1,100 pages!!! EEK!

I saw note of the Pintupi 9 elsewhere, but they were beyond the scope of a book review. They were 1984. Wiki says:

The Pintupi Nine were a group of nine Pintupi people who lived a traditional hunter-gatherer desert-dwelling life in Australia's Gibson Desert until 1984, when they made contact with their relatives near Kiwirrkurra. They are sometimes also referred to as "the lost tribe". The group were hailed as "the last nomads" in the international press when they left their nomadic life in October 1984.