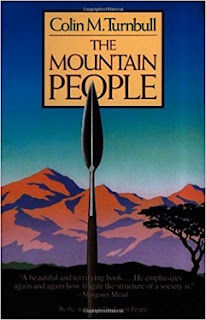 
Anthropologist Colin Turnbull was born London in 1924, and raised in a surreal upper class family, which he described in his important book, The Human Cycle.  World War Two jolted the pampered lad into the bloody real world.  In the 1950s, he spent lots of time in the Congo, with the Mbuti Pygmies, who inspired his masterpiece, The Forest People.  It was a beautiful life-changing experience to live with healthy, happy humans who were profoundly in love with their sacred forest — nothing like the zombies of England.


When war in the Congo zapped his plans for another visit, he accepted an assignment to learn about the Ik tribe in northeastern Uganda.  The government wanted a plan for transforming them into law-abiding taxpaying farmers.  For unknown thousands of years, they had been hunter-gatherers in the Kidepo Valley, an arid mountainous savannah.


In 1962, their traditional lands became a 540 square mile (1,399 sq km) wildlife preserve, the Kidepo Valley National Park.  Hunting was banned, and the Ik were moved into the mountains.  They were expected to magically shape shift into farmers in a region that experienced droughts about one in every four years.  Turnbull’s study ran from 1965 to 1967, and the first two years were back-to-back droughts.  Crops withered in the fields, the granaries were empty, and about 2,000 people began to starve.  Turnbull described the cultural meltdown in The Mountain People.


Turnbull wrote, “The hunter and gatherer gives little thought for the morrow, getting his feed fresh, from day to day, with the ready assurance of someone who has come to terms with the world around him.  He knows the world he lives in as few others do, and he lives in sympathy with it, rather than trying to dominate it.”  A farmer can lose a year’s work in one night.  A hunter can only lose a day’s work.


When he first got there, the famine was just beginning.  Two months later, the horror began.  People became totally self-centered.  Their two interests in life were now food and water.  Most became habitual liars, and most took every opportunity steal Turnbull’s stuff.  They pulled many juvenile pranks on him, hoping for him to get hurt or die.  “The people were as unfriendly, uncharitable, inhospitable, and generally mean as any people can be.”  They laughed hard at anyone’s misfortunes.  It was amusing to steal food from the feeble, and push them down.


Upon being weaned at age three, youngsters were thrown out of their parents’ house.  Evicted children formed bands and wandered the countryside looking for something to eat.  Lucky ones found some figs, the unlucky ate dirt and pebbles, and soon died.  Feeding children and elders, who couldn’t take care of themselves, was a foolish waste of precious nutrients.


Turnbull was often scolded for his idiotic generosity.  He was feeding folks who were soon to be dead, cruelly prolonging their misery.  Adults refused to feed their starving parents, or let them into their house.  When they died, most were quickly buried in the family compound, in secrecy.  If the villagers found out, they would expect a funeral ceremony, which required a feast.


Famines were a crappy time to be born.  Nobody was happy to see you, nobody cared.  When out foraging, mothers put their babies down roughly, and didn’t watch them carefully.  Maybe a hungry leopard would relieve her of her little bummer.  One time, a leopard ate a baby.  Sleepy from a delicious meal, the cat laid down for nice nap.  Men found it, killed it, and ate it, baby and all.


Turnbull once took pity on an old woman who was close to death.  He wanted to create a new village, where the abandoned people could be properly cared for.  She was not interested.  She wanted to die near her son, who would not take care of her.  Turnbull fed her, and gave her some food.  She burst into tears, because this triggered memories of “a time when people had helped each other, when people had been kind and good.”  She was the last survivor who remembered the good old days.


Stuff like this fills most of the book.  Turnbull spent 18 months eating by himself in his Range Rover.  For some reason, he got the blues.  He hoped “that we who have been civilized into such empty beliefs as the essential beauty and goodness of humanity may discover ourselves before it is too late.”  “Most of us are unlikely to admit readily that we can sink as low as the Ik, but many of us do, and with far less cause.”  Whoa!


I first read The Mountain People in 2001, and it snapped my mind.  It was an unforgettable book that you wished you could forget.  I was blindsided by the misery, cruelty, and horror, and this was the impression that I took away from the book.  In 2017, I read the book a second time, and it blew me away again, for another reason.  Near the end of the book, Turnbull shared some troubling conclusions that I was too dazed to grasp in my first reading.  He held up a mirror, so his well-fed readers could see their own deformities, and get their noses rubbed in them.


Having spent years with the Mbuti, he had directly experienced a healthy functional society.  Before that, he had grown to adulthood in twentieth century Western society, a world of atomic bombs, concentration camps, and the brutal extermination of tens of millions.  It was the opposite of a functional society.  It had become pathologically individualized and de-socialized — similar to the Ik, and in many ways worse.  The Ik give us a taste of our days to come.


“We pursue those trivial, idiotic technological encumbrances and imagine them to be the luxuries that make life worth living, and all the time we are losing our potential for social rather than individual survival, for hating as well as loving, losing perhaps our last chance to enjoy life with all the passion that is our nature and being.”  Today, Americans speed down the highways in their motorized wheelchairs while the polar ice melts, and monster hurricanes obliterate societies.  Sorry kids!


Here is a comment, from 45 years ago, that could have been written today.  “The state itself, is resting ever more on both intellectual and physical violence to assert itself.”  Heads of state and their assistants fill the air with “loud-mouthed anti-intellectual blabberings.”  The populace learns not to believe, trust, love, hope, or think.


The Mbuti enjoyed a society harmonized by a common set of beliefs, values, and lifestyles.  Everyone was on the same channel.  Our society is a cranky boisterous mob of numerous competing cultures, classes, and religious beliefs.  “In larger-scale societies we are accustomed to diversity of belief, we even applaud ourselves for our tolerance, not recognizing that a society not bound together by a single powerful belief is not a society at all, but a political association of individuals held together only by the presence of law and force — the existence of which is a violence.”


Love is not a hardwired function, like breathing.  It has to be learned.  When love is not reciprocated, it dies.  The Ik demonstrated that love can go extinct.  When lonely consumers are starving for love in modern society, many choose to purchase companions. “The keeping of pets, which is one of the characteristics special to civilization, indicates a deterioration in human relationships.”


The Ik were excessively individualistic, spending their days in solitude and boredom, rarely forming significant relationships.  Each one was alone, and content to be alone.  Turnbull often sat with Ik men on a ridge overlooking the valley, gazing into space.  Day after day, all day long, not a word was ever spoken.  This reminds me of the spooky smart phone cult in my town today.  People gather around tables in a café, each silently gazing at their glowing screens.


The Ik expelled their children from home at age three.  Westerners wait until kindergarten, when the kids begin their decades of institutionalization.  The state now oversees health, education, and welfare.  We are indoctrinated with an “individualism that is preached with a curious fanaticism.”  This radical individualism “is reflected in our cutthroat economics, where almost anything is justified in terms of an expanding economy and the consequent confinement of the world’s riches in the pockets of the few.”


When it was released in 1972, The Mountain People got a lot of attention.  Immediately, hordes of dignified scholars explosively soiled their britches.  Heresy!  The Ik were nothing but an extreme exception, a bizarre mutation!  Civilized humans are moral and virtuous!  We are the greatest!


HERE is a 5-minute video about Colin Turnbull and the Mbuti.  The narrator says, “His advisor at Oxford wrote that Colin Turnbull is tall, fair, handsome, impulsive, and elusive.  All his screws are loose, real communication with him seems impossible.  Perhaps one has to belong to one of the backwards races in order to get his wavelength.”
Posted by What Is Sustainable at 2:39 PM

“In larger-scale societies we are accustomed to diversity of belief, we even applaud ourselves for our tolerance, not recognizing that a society not bound together by a single powerful belief is not a society at all, but a political association of individuals held together only by the presence of law and force — the existence of which is a violence.”

I think about this all the time. Reminded me also of something I just read by a blogger I really like to read, td0s.

"Civilization is a collective psychosis. Each human mind perceives its own version of reality. In slow times and small groups this is a far more manageable conundrum. Foundations of understanding can be built from simple observations – rock, tree, fish – and a shared worldview can then take shape. No two identical, but similar enough to agree upon the environment in which they exist and how to go about surviving. Civilization instead defines existence from the top down, and has drawn and quartered any and every faint inkling of the sacred or the mystical. Feelings of interaction with the living world around us have been demoted to the status of juvenile ravings. In the hyper complex modern world, entropy now is fracturing language. Symbols are bled of their meaning only to be recuperated by charlatans leaving the denizens of the national plantation unable to come to terms over how to define their present context, let alone their future. So they check their devices for an update."

Hi Matt! Thanks for the link. Yes, I think the line about the disorder caused by diversity was my favorite line in Turnbull’s book. While it’s politically incorrect, it feels like a powerful truth. Living in a chaotic mob, year after year, sucks. This was not how almost all of our ancestors lived. It would be a joy to live in an Earth-centered society in which everyone was on the same channel.