The Forgiveness of Nature 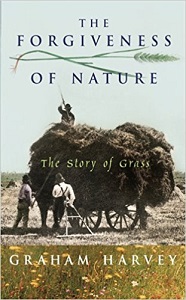 
I grew up in the battered remains of a once vast hardwood forest in Michigan.  I was lucky to spend my childhood wandering in a small surviving remnant.  My forest was a sacred place.  To me, the western plains felt dry, empty, bleak.  But my oldest ancestors evolved on the arid savannahs of Mother Africa — grassland with scattered brush and trees.  Grassland was where the big game hung out, and they were good to eat.  Recently, I studied horse history, and learned a lot about the vast steppe grasslands of Eurasia.  They were also home to big game and nomadic hunters.


I began to get curious about grass.  There are maybe 12,000 species of grass, and they inhabit climates between the arctic and equator.  More than half of the calories consumed by humankind come from three grasses: rice, wheat, and corn (maize).  Others include oats, barley, millet, sorghum, sugar cane, and bamboo.


Clive Ponting noted that in the last 300 years, the world’s grassland has increased 680 percent.  The forests of the U.S. Midwest were destroyed to grow corn, wheat, and livestock.  The Amazon rainforest is being destroyed to create cattle pasture.  So were the rainforests of Britain and Ireland.  The list is incredibly long.  I discovered that a British grass worshipper, Graham Harvey, had written a passionate book, The Forgiveness of Nature: The Story of Grass.


Nature “forgives” humankind’s tireless vandalism — deserted roads, villages, and battlefields are eventually covered with a healthy carpet of greenery.  “Like the horse and hyena, Homo sapiens is first and foremost a creature of the grass,” wrote Harvey.  The Bible says “All flesh is grass,” because all flesh is mortal: green today, brown tomorrow; but God is eternal.  In 1872, John James Ingalls of Kansas offered a different interpretation.  “The primary form of food is grass.  Grass feeds the ox: the ox nourishes man: man dies and goes to grass again; and so the tide of life with everlasting repetition, in continuous circles, moves endlessly on and upward, and in more senses than one, all flesh is grass.”


Harvey described the heartbreaking story of the American prairies.  Farmers first arrived during an unusually rainy period.  They plowed under lots of turf, tapped the fantastic fertility of the rich black soil, and had fantastic harvests for a while, until drought returned, and the Dust Bowl blew away millions of tons of degraded soil.  Within 50 years, the party was over.  Farming continues today, with significant yields, but the heavily diminished soil is kept on life support by fertilizer, pesticides, irrigation, and fossil fuel.


Native Americans enjoyed the abundance of the prairie for free, hunting herds of 50 million bison.  Observers described one herd that was 50 miles (80 km) long and 25 miles (40 km) wide, maybe 480,000 animals.  American colonists now use the prairie to raise 45 million cattle, in a capital intensive, fossil fuel powered enterprise that degrades the grassland.  Bison evolved on the plains; they grazed and then moved on, allowing the grass to recover.  Cattle moved too little, and they were heavily overstocked.  Regions of the once-rich ancient turf were “grazed practically to dirt.”


Montana writer Richard Manning summed it up.  “Seventy per cent of the grain crop of American agriculture goes to the livestock that replaced the bison that ate no grain, and one wonders, what is agriculture for?”  Cattle don’t need grain, but farmers are subsidized to grow enormous surpluses.  Harvey lamented the rape of the prairie, “It was a biological powerhouse, rich in wildlife and with a productivity no modern farming system could match.  Yet Americans waged a ceaseless war on this priceless asset, and now it has all but disappeared, its life snatched by the quick cut of steel or slowly sapped by overgrazing.”


Harvey carefully described the many ways in which evolution ingeniously created grasslands that could survive almost any challenge — except civilization.  They created soil-building humus, which retained moisture and accumulated nutrients.  Many plants have very deep roots, up to 32 feet (10 m), which bring up nutrients.  They can tolerate fire, drought, and grazing.  In fact, they need grazing, to nip off the first shoots of woody shrubs and trees that would compete for sunlight.


Back in the good old days, on the steppe and prairies, the bison and other grazers manicured the turf, and the wooly mammoths controlled the woody plants.  With the mammoths and mastodons gone, and elephants fading, humans in many regions around the world have adapted “firestick farming” to expand grassland area, control woody vegetation, improve the vitality of the forage, and attract game.  Burning off the dry grasses eliminates hiding places for game, and provides a banquet of roasted grasshoppers and other delicacies.


Grasslands are arid, receiving just 10 to 30 inches (25-76 cm) of rain per year.  In wetter prairies, grass can grow tall enough to hide a horse.  Lands getting less than 10 inches are desert.  More than 30 enables forest.  Britain is wet, not arid.  Its grasslands are manmade.  The land was once largely a rainforest.  Over the centuries, nomadic pastoralists gradually cleared trees to expand meadows for their cattle, sheep, and pigs.


In Harvey’s mind, this was the golden age, an era of wonderful freedom and easy living — before the arrival of farming, drudgery, serfdom, and oppressive nobility.  It doesn’t occur to him that wild Britain was even freer, when the ancient forest thrived, home to red deer, wild boar, wolves, and aurochs, and the Thames was loaded with salmon.  Tragically, agriculture displaced the nomadic herders, “setting Britain on its momentous path to ownership and exclusion, enclosure and dispossession, industrialization and urban living, to factory farming and genetically modified foods.”  Harvey screams “Why?”


Sheep sped the Brits down the road to ruin, a sheepwreck.  The climate was ideal for producing wool of exceptional quality, which became a major industry, and made many people very rich.  This led to the enclosure movement, during which peasant farmers were evicted from the land, so their fields could be converted into valuable sheep pasture.  The wool gold rush generated much of the capital needed to launch the industrial revolution.


Many of the evicted farmers migrated into rapidly growing urban slums that were crowded, filthy, and disease ridden.  They were joined by hordes of desperate refugees from the Irish Famine.  This generated widespread discontent that could not by soothed in gin palaces.  The fat cats got nervous, fearing unrest and revolution.  Grass came to the rescue.  Liverpool, New York, and other cities began building parks, providing islands of green sanity amidst the industrial nightmare world.


Delirious from perpetual growth fever, Brits joined the Americans in racing down the dead-end road of industrial agriculture — synthetic fertilizers, pesticides, big machines, fossil fuel, monocultures, feedlots, mega-farms.  Maximum yields were the goal, <bleep> the topsoil, the ecosystem, the grandchildren.  This explosion of pure idiocy drove poor Harvey bonkers.  He goes to great lengths to enthusiastically educate readers on the magnificence of healthy topsoil, and the many ways that spectacularly stupid people foolishly destroy it.


His grand vision is a wise transition to organic mixed farming, a three-year rotation of winter grain, spring grain, and a fallow of grasses and red clover — combined with regular application of all available manure.  While this is better than the current norm, there are some important drawbacks.  Every trainload of wheat shipped away to London includes essential nonrenewable nutrients that will never be returned to the farm.  The soil nutrients sent to London stay in London, where they are mixed into toxic sludge.  Anything less than 100 percent nutrient recycling is an enterprise with an expiration date.


Britain usually has gentle rains, so less soil is washed away than in the U.S., where torrential downpours are common, and soil erosion is a huge problem.  Harvey asserts that mixed farming can heal the wrecked soil, rebuild the humus, and restore the millions of tiny creatures that thrive in healthy soil.  If people did this everywhere, enough carbon could be sequestered in the soil to snuff climate change.  Listen to this: “A return to sound husbandry in agriculture would end global warming without the need for motoring cuts.”  Oy!


When my Norwegian ancestors settled in Iowa in 1879, folks were astonished by the coal black topsoil that could be up to 12 feet (3.6 m) deep.  This super-fertile soil was created by thousands of years of healthy tall grass prairie.  Today, this treasure is nearly gone.  Plows are turning up yellow patches of subsoil.  A wise elder once concluded that the plow has caused more harm to future generations than the sword.


Harvey explores many other subjects.  His book is easy to read, and out of print.  It will inspire you to psychoanalyze the suburbanites who spend thousands of dollars obsessively maintaining spooky freakshow lawns that look as natural as Astroturf.  They must spend their nights having sweet dreams of chasing antelopes across the endless prairies.


Harvey, Graham, The Forgiveness of Nature: The Story of Grass, Random House, London, 2001.
Posted by What Is Sustainable at 11:53 AM

"When my Norwegian ancestors settled in Iowa in 1879, folks were astonished by the coal black topsoil that could be up to 12 feet (3.6 m) deep. This super-fertile soil was created by thousands of years of healthy tall grass prairie. Today, this treasure is nearly gone."
An absolute "Piece de Restistance". You can't keep robbing and killing and unpicking the fabric of the biosphere without expecting a crash.
Why has Germany lost 75% of it's flying insects in the last 27 years?
Professor Paul Ehrlich and I discuss this aspect of collapse here;
https://kevinhester.live/2017/11/09/nature-bats-last-on-prn-fm-featuring-professor-paul-ehrlich/

Your Excellence! Sorry for the late response. The library provides internet access in one hour blocks. I planned to bring my laptop some day, and listen to your Paul Ehrlich interview, but forgetfulness suffocated the idea. I’ve never heard the Kiwi dialect spoken before. That was fun.

I’ve spent lots of hours watching, reading, and writing about the Ehrlichs. It’s almost mandatory for scholars to project the notion that it’s not too late for human intelligence to pull us out of our tailspin. Most scholars inspire students with magical visions of Sustainable Growth™ and Sustainable Development™. Ehrlich has remained a radicalized devotee to reason and common sense. Over the years, his belief in the possibility for miracles faded — a 3% chance, to 2%, to 1%.... (pfssst!)

The lad gets an A+++ for effort, and an A+++ for maintaining a no bullshit commitment to the facts. Realistically, the notion of radically changing the beliefs and behaviors of 7.5 billion primates was extreme, but charming. Collapse will be an effective fast-acting medicine — a messy and merciless deathblow to the machine. Will we learn?