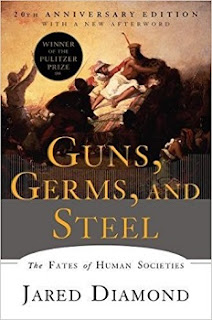 
Professor Jared Diamond did research in New Guinea, and became buddies with many natives.  One day, a lad asked him why some societies became so rich, and others did not.  Why are there haves and have-nots?  White folks with European ancestors have done better economically than folks in New Guinea, and many other regions.  To a number of dodgy white gits, this was absolute proof of their racial superiority.  Diamond disagreed and explained why in his bestselling Pulitzer Prize winning book, Guns, Germs, and Steel.


White folks did not become dominators via divine blessings, or genetic perfection.  They were simply the winners of a lottery named geography, folks who happened to live in the right place at the right time.  This provided them with big advantages over societies of equally intelligent people, of all other races, who had not won the lottery.


Human history is a story that is maybe five million years old, and it sprouted in our African motherland.  For almost the entire saga, our ancestors were hunter-gatherers who developed a low impact mode of living.  By and by, the ancestors migrated into Asia, Australia, and Europe, where they invented clever new tricks for surviving in unfamiliar places.


For Diamond, the excrement hit the fan when the Ice Age rode off into the sunset, and the planet warmed up and stabilized.  At that time, the Fertile Crescent was a fabulous place to live, situated between Europe and China.  It was home to large herds of gazelles, and grasslands loaded with wild wheat, barley, and peas.  Of course, abundant food tends to stimulate population growth.  Eventually, the number of mouths reached the point where wild food resources became strained.  Around 7500 B.C., farming and herding began displacing hunting and foraging.  Food production was the ominous first step on the bloody path to guns, germs, and steel.


Most of the wild grass species that produce large seeds live in Mediterranean climates, and the Fertile Crescent was especially blessed with these plants.  It was home to several grain and legume species that were suitable for domestication.  An acre of domesticated wheat could produce 10 to 100 times more nutrients than an acre of wild grassland.  This was a unique situation.  In our African motherland, which was south of the equator, the number of food plants suitable for domestication was zero.


Of all the species of large herbivores in the world, only fourteen were suitable for domestication.  One lived in South America, and thirteen in Eurasia.  Diamond listed the traits that made a wild animal suitable for domestication, it “must be sufficiently docile, submissive to humans, cheap to feed, immune to diseases, grow rapidly, and breed well in captivity.”  The Fertile Crescent was unusually lucky to be home to four wild animals that eventually became the most important domesticated livestock of all: goats, sheep, pigs, and cattle.  This was a unique situation.


In our beloved African motherland, zero large herbivores were suitable for domestication.  Zebras were so wary of hungry lions that they refused to be owned and controlled.  The older the zebra, the meaner.  The guinea fowl was the only animal that all experts agree was originally domesticated on the continent.  Thus, if humankind had remained in home sweet home, with nothing to eat but wild organic foods, we’d likely still be wild and free today, and Detroit and Paris would be hangouts for mammoths and buffalo.


Livestock provided folks with meat, milk, fertilizer, hides, wool, and muscle power.  When animals were milked, they provided herders with far more lifetime calories than could be consumed by simply killing and eating them.  In different regions, folks milked cows, sheep, goats, horses, reindeer, water buffalos, yaks, and camels.  Folks also rode on the backs of horses, donkeys, yaks, reindeer, and camels.  Mounted cavalry radically redefined the rules for warfare and raiding.  Beasts of burden were used to pull plows, carts, and sleds, and to haul loads of cargo on their backs.


A serious downside of keeping livestock was being in constant close contact with large herds of animals.  Many herders lived and slept close to their critters.  This encouraged a number of animal pathogens to adapt to human hosts, like influenza, smallpox, tuberculosis, plague, measles, and cholera.  As rising food production encouraged the emergence of civilizations and cities, this created perfect conditions for epidemic diseases, which thrive in filthy crowds.


After Columbus landed in America, maybe 90 percent of Native Americans perished from Old World diseases.  Indians didn’t have similar diseases to share with the white folks, because they kept few domesticated animals.  Llamas and alpacas lived in small herds, and only in the Andes.  They didn’t live in close contact with people, and people didn’t drink their milk.


The big idea in Diamond’s book was about the axis of continents.  In Africa and the Americas, the land base was taller than wide, spanning multiple climate belts.  This north-south axis presented obstacles for the easy movement of people, livestock, crops, technology, and ideas.  From north to south in Africa, the belts were Mediterranean, Saharan, rainforest, savannah, and Mediterranean.


Eurasia had a huge land base, spanning from France to China.  Generally, tropical climates (mostly hot) are found near the equator, arctic climates (mostly cold) are close to the poles, and temperate climates (hot & cold) are found between them.  Food production and civilization emerged in the Fertile Crescent, which had a temperate climate.  The east-west axis of Eurasia made it easy for people, livestock, crops, technology, and ideas to spread across the vast temperate zone.


The early farmers and herders of the Fertile Crescent were living in a new-fangled way, with no traditional wisdom to guide them.  They began a reckless joyride in trial and error, and gained tremendous expertise in error.  The forests were mowed down, and erosion plugged up the valleys and harbors.  Irrigation systems eventually made the soil so salty that it became infertile.  Ravenous goats hungrily sabotaged nature’s every effort at healing.  Over time, paradise largely became a desert wasteland.  So, many survivors packed up and migrated to new homes.  Some went east to China, others went west to Europe.  Their brilliant plan was to repeat the same mistakes.


In China, folks grew millet in the north, and rice in the south.  Innovators developed a number of important technologies, like gunpowder, cast iron, navigation, paper, and printing.  But you are not gazing at Chinese characters right now, because they did not colonize the world.  China unified their empire in 221 B.C., and its culture was conservative — don’t rock the boat!  Job One was to maintain order across the large complex society, so the friendly tax collectors could safely visit everyone.


Europe, on the other hand, was a chaotic wild west — politically fragmented and terrifically competitive.  In 1500, it was home to maybe 500 smallish states, spread out across many islands, peninsulas, and mountain valleys.  Each was a hub of innovation.  Job One was to avoid getting exterminated by ambitious enemies, and Job Two was to exterminate enemies at every opportunity.


There was a nonstop arms race to develop more and better weapons, fortifications, ships, steam engines, and so on.  Technologies and ideas moved with great speed back and forth across the continent.  Consequently, Europe was the region that colonized the world, spreading across the temperate regions of North America, South America, northern and southern Africa, southern Australia, and so on.


Anyway, Diamond presented many competent answers to the question of why some societies are haves, and others are have-nots — mission accomplished.  I’ve only mentioned a few of his many points here.  The black hole in the book is a more important question.  The book presumes that it’s cool that some societies are in the “haves” category.  Ecological sustainability is off the radar.


There is one sentence with a whiff of doubt: “If those first farmers could have foreseen the consequences of adopting food production, they might not have opted to do so.”  Obviously!  The twenty-first century way of life would have totally terrified them, an overwhelming horror show of unimaginable craziness and destruction.  Of course, the book was written in 1997, when Earth was home to a wee herd of 5.8 billion.  In those days of love and innocence, climate change and energy limits were still largely paranoid fantasies among the lunatic fringe.


But Diamond thoroughly understood the dark side of the “haves.”  Ten years earlier, he wrote an essay, The Worst Mistake in the History of the Human Race.  He said, “Recent discoveries suggest that the adoption of agriculture, supposedly our most decisive step toward a better life, was in many ways a catastrophe from which we have never recovered.  With agriculture came the gross social and sexual inequality, the disease and despotism that curse our existence.”


Every year, thousands of college students are required to read Guns, Germs, and Steel.  They are spending a fortune on tuition, hoping to devote their lives to climbing up the hierarchies, living as lavishly as possible in the Empire of the Haves, and overloading landfills with the discards of their infantile opulence.  They are not being prepared for the advancing storms that will eventually pummel their generation.


Diamond added an afterword section to the 2003 reprint of his 1997 book.  Bill Gates loved it.  Diamond was contacted by numerous corporate leaders seeking guidance.  “What is the best way to organize human groups, organizations, and businesses so as to maximize productivity, creativity, innovation, and wealth?”  Our culture’s worldview only has one channel, perpetual economic growth — another joyride having no guidance from traditional wisdom.  Full speed ahead!


National Geographic produced an excellent three-part (3 hour) documentary on Jared Diamond and his book.  Go HERE.
Posted by What Is Sustainable at 2:39 PM

Hi, Just found your blog via a link from In Transition blog. Will enjoy reading through past posts. Just bought your book, What Is Sustainable. So many people have no understanding of the concept.