A Farewell to Ice 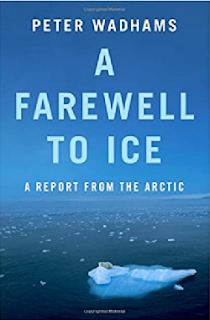 In 1968, the Apollo-8 mission orbited the moon, and took the first photo of the Earth rising above the moon’s horizon.  In that photo, Earth was white on both the top and bottom.  Today, when it’s summer in the northern hemisphere, the distant view shows a white bottom and a blue top.  An ancient ice sheet is becoming an ocean.  With a sloppy stampede of well-intended, self-defeating, highly-destructive booboos, human cleverness has changed the planet.

In 1970, Peter Wadhams began studying cool stuff in polar regions — sea ice, glaciers, ice sheets, snow, and permafrost.  When he began his 47 years of research, polar ice was not a headline making subject that begged for the full attention of the world.  He is now among the world’s top experts in the field.  His book, A Farewell to Ice, sums up what he has learned over the years.  It provides an understandable, uncomfortable, and important introduction to the Climate Crisis.

Arctic ice is precious, because it nurtures the existence of a climate that enables complex biodiversity.  But things are changing now.  When incoming sunbeams hit white regions, some of the heat is reflected away from the planet, back into outer space.  This ability to reflect is called albedo.  Fresh snow, which is very white, reflects 80 to 90 percent of incoming heat.  So, it has an albedo of 0.8 to 0.9.  Ice that has been bare for a while accumulates soot and dust, which makes it darker, less reflective.  It has an albedo of 0.4 to 0.7.  Sea water and dry land are darker, and absorb more incoming heat.  Open water has an albedo of 0.1.

When albedo reflectivity weakens, more heat can enter the atmosphere, and accumulate.  Ice gets thinner, breaks up, and retreats.  So, more sunlight hits more open water, which absorbs more heat.  More ice that used to exist year-round now melts away during the warmer months.  The duration of ice-free summer periods is lengthening.  This vicious circle is called the “Arctic Death Spiral.”

Glaciers, ice sheets, and sea ice have existed for thousands of years, leftovers from previous ice ages.  Once they are gone, they will not return for a very long time, if ever.  They were still in pretty good shape at the dawn of the Industrial Revolution.  If human population and lifestyles had remained at pre-industrial levels, the Arctic might still be an awesomely cool and stable region.

This atmospheric greenhouse enables our survival, because life is possible when it’s warm enough for water to exist in liquid form.  Every living cell contains water.  The greenhouse also prevents most seawater from freezing.  Unfrozen oceans absorb incoming solar heat and retain it, which is good and normal, up to a point.  Right now, ocean absorption is what’s (temporarily) saving our asses.  Eventually, the oceans will get too warm, which will impact marine ecosystems, and everything else.  Eventually, the climate will get more unstable.  Agricultural systems will get dizzy and wobbly.  Life will become more exciting.

There are several greenhouse gases that help the atmosphere trap heat, including ozone, water vapor, nitrous oxide, carbon dioxide, and methane.  Wadhams is especially concerned about carbon dioxide (CO2) and methane (CH4), because of their primary role in encouraging warmer temperatures.  CO2 is responsible for about 55 percent of the greenhouse warming issues.

Some CO2 emissions can remain in the atmosphere for thousands of years.  A lot of it is absorbed by plant life and oceans.  Prior to the Industrial Revolution, CO2 levels in the air were 280 ppm (parts per million).  Today, they are 421 ppm.  Current trends suggest that in 75 to 100 years, levels will double (800+ ppm).  In oceans, CO2 dissolves and forms carbonic acid, which damages the shells of sea critters, and hammers coral reefs.  Wizards have calculated that oceans now absorb over one million tons of manmade CO2 every hour!  [LINK]  What could possibly go wrong?

CO2 is precious.  If there was no CO2, there would be no plants or animals.  During photosynthesis, all plants take in CO2 and emit oxygen, which all animals need.  We’re now learning that it’s possible to have too much of a good thing.  Wadhams shouts (in bold text), “adding carbon dioxide to the atmosphere inevitably causes a temperature rise.  And, the more you add, the greater the temperature rise.”

It won’t be long before the North Pole will be ice-free for the first time in tens of thousands of years.  In the ’70s, summertime Arctic sea ice covered over 3 million square miles (7.8 million km2), an area larger than the continent of Australia.  In 2012, it covered just 1.3 million square miles (much more open water).  Climate change is happening most rapidly in the Arctic.  Their summers are now having some horror show heat waves.  The Southern Hemisphere has been less vulnerable to ice age periods, because it has less dry land, and much more heat-retaining ocean area.

So, as Arctic snow and ice retreats, albedo declines, more sunbeams arrive, temperatures rise, melting increases, and on and on…  This is called a feedback loop.  Our emissions have created growing imbalances that now enable self-perpetuating feedback loops.  “We are fast approaching the stage when climate change will be playing the tune for us while we stand by and watch helplessly, with our reductions in CO2 emissions having no effect.”  This is what is known as runaway warming.

Concentrations of methane are also rising in the atmosphere.  They have risen from 700 ppb (parts per billion) in preindustrial times, up to 1,940 ppb recently.  Methane is a much more powerful greenhouse gas, but it only stays in the atmosphere for 7 to 10 years, during which time it is 100+ times more harmful than CO2.  Then, it breaks down into CO2.  When methane’s brief existence is calculated within a hundred year timeframe, its impact is 23 times worse than the hundred year impact of CO2.

In addition to airborne methane, massive amounts of it are stored in seabed permafrost, in the form of methane hydrates — flammable frozen crystals of methane and water.  When the permafrost thaws, the hydrate crystals dissolve, and the methane is released.  Permafrost is soil that has been frozen for years, often thousands of years.  Deposits can be hundreds of yards (or meters) deep.  With regard to warming and methane, Wadhams highlights two daunting issues.  One is offshore permafrost (underwater), and the other is terrestrial permafrost (under dry land).

Offshore permafrost is a dire concern for Wadhams, because it has the potential to be the source of a monstrous release of methane within a few decades.  This permafrost formed on dry land thousands of years ago, when sea levels were much lower.  Today, it is buried beneath seabed sediments.  It contains substantial amounts of methane hydrates, and it is especially vulnerable to thawing as sea ice retreats, and water temperatures rise.

The East Siberian Sea includes 810,000 square miles (2.1 million km2) of shallow water, most of which is less than 130 feet (40 m) deep.  In the good old days, the sea used to be covered year round with surface ice, which kept the water frigid.  This changed in 2005, when summer sea ice began disappearing, which exposed seawater to the atmosphere for the first time.  Sunlight could now penetrate directly into the water and warm it.  Shallow waters warmed faster than deeper areas.

For the first time in tens of thousands of years, warm water could reach the seabed, causing frozen sediments to thaw.  Then, as the underlying permafrost thaws, large plumes of methane bubbles are released.  In deeper waters, the rising methane oxidizes, and the plume disappears before reaching the surface.  In the shallows, methane makes it to the surface, and is released into the atmosphere.

In the entire Arctic Ocean, the methane hydrate deposits are estimated to contain 13 times the amount of carbon currently present in the atmosphere.  Wadhams believes that “the risk of an Arctic seabed methane pulse is one of the greatest immediate risks facing the human race.”  Russian scientists on site calculate that the probability of this is at least 50 percent.  Scientists skeptical about the possible methane pulse have one thing in common — none have participated in research on the East Siberian Sea.  In a 2020 article, Wadhams revealed that the East Siberian Arctic Shelf was home to high concentrations of methane hydrates in permafrost layers that are up to 1.25 miles (2 km) thick. [LINK]

Terrestrial permafrost is buried under dry land across the Arctic.  It is found within a region of 7.3 million square miles (19 million km2) — something like the combined land area of Russia and Argentina.  As Arctic temperatures soar, the permafrost is rapidly thawing.  Soils in this permafrost contain lots of organic carbon, plant material that lived long ago, but froze before fully decomposing.  Unlike offshore permafrost, terrestrial permafrost does not contain methane while frozen.  But when it thaws and decays, chemical processes then create CO2, methane, and nitrous oxide.

Wadhams strongly suspects that a massive seabed methane pulse may occur in the next decade or so.  One way or another, fast or slow, the permafrost will inevitably thaw.  Nobody questions that the climate is warming.  The amount of carbon stored in the offshore permafrost is estimated to be 50 gigatons, but the terrestrial permafrost is estimated to hold 1,400 to 1,700 gigatons (30 times more than offshore).  Wadhams believes that most of the massive greenhouse emissions are likely to take place by the end of the century, at the latest.

So, that’s a bit about what this book is about.  When you sit down with a copy from your friendly local library, you’ll learn much more.  Wadhams is profoundly concerned about the path we’re on, and is distinctly gloomy about where we’re headed.  He admits that the technological miracles that will successfully end the Arctic Death Spiral have yet to be invented, and may never be.

Humankind remains largely clueless, whilst insanely committed to preserving our maximum waste lifestyle, as long as possible, by any means necessary.  Only dangerous heretics talk about sensibly turning stuff OFF.  We are wading neck deep in happy talk, misinformation, gibberish, and magical thinking.  The jungle drums keep talking about “solving the Climate Crisis.”  The spotlights are aimed at solar panels, electric cars, and LED light bulbs, not melting permafrost.  What could possibly go wrong?

Posted by What Is Sustainable at 9:40 AM

As always, Rick... excellent! Thank you!!