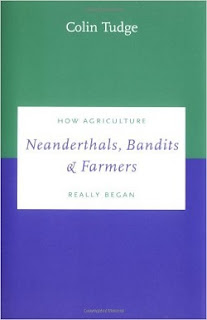 Hi Anonymous. Thanks for the link. I just spent the last 3 hours taking detailed notes on Scott's lecture. There is so much important information in less than 40 minutes. It's also on YouTube:
The Domestication of Fire, Animals, Grains, & Us.

Science tells us that biological evolution generally proceeds slowly, incrementally over extended periods of time, but that certain organisms have evolved in fits and starts, some even relatively quickly. I suspect that political history might reveal the same pattern, and that sometimes it is in the best interests of a political organism to make a sudden change in course, a revolution as it were.

Can such a revolution occur with a minimal amount of violence? Possibly, but not common. There is historic precedent in the biological and social record for peaceful disruptive transitions. For encouragement I look to the recent and remarkable successes of today's burgeoning ecovillages and permaculture/regenerative farming communities that are thriving peacefully around the globe, pointing the way for those who are strong enough to follow. We can also look to the exponential growth of the digital revolution, although the results so far are a mix of good and not-so-good for society and nature.

Can we look to the Bernie Sanders' revolution to change the Democratic Party enough to lead us into a new era of climate responsibility? Stay tuned and don't hold your breath. Call me skeptical, yet undaunted.

Obviously, genes aren’t the issue here. Isolated tribes in the Amazon, having the same genes as you and I, are not two-legged tornados. The issue is cultural evolution, which is capable of making significant changes fairly quickly. Jim Crow no longer dominates the main stage. The U.S. has a black president. Gay folks are gaining rights and respect. At the same time, neo-fascists have become hot items. So has religious fanaticism.

I have a hard time imagining humankind abandoning sprawling cities, moving to permaculture ecovillages, and living happily ever after — even if the climate change threat did not exist. I think we are going to experience revolutionary change in the coming decades, but this change is going to be driven by Big Mama Nature, not by brilliant human visionaries, teachers, leaders, and newly enlightened enthusiastic masses.

From a human perspective, there is no win/win alternative. The herd of 7.4 billion cannot continue on the same path for much longer. A herd this size requires energy-guzzling industrial civilization to keep it on life support. The clock is running out on this approach.

From Big Mama Nature’s perspective, there is a win/win alternative. Overshoot always self-corrects. When life as we know it disintegrates, the survivors are going to have to learn how to live outside the cage of industrial civilization, or slam into our expiration date.

Twenty years ago, I could imagine a surge of human intelligence inspiring a Great Healing. Today, I have too many info feeds. The infection is totally out of control. Not even Saint Bernie can save us. I can no longer envision beautiful miraculous transformations. There will certainly be a Great Healing, but…

Collapse is not unfair, unjust, or bad luck. It is simply reaping what we have sown. Cultural evolution has hurled us far, far, far from where we belong. Collapse might provide an important lesson. Are we smart enough to learn it? Or, is it time for us to join the spirits of the wooly rhinos?

Below is a link to just one example of many that the Medea hypothesis (life destroys life) explains our behavior--it's what life does. How many people recognize the many ways each day they destroy life? That recognition is the beginning of limiting the destruction for a while, but our rhino horns are already growing long and few seem to notice.

I don’t know enough about the Medea hypothesis to say anything. I haven’t read the book.

I spent about four hours today picking six gallons of blackberries, and three or four hours canning them. I biked maybe 15 miles making two round trips to berry heaven. I’m tired, and my mind is operating on maybe 25 watts. Foraging is always a pleasant way to spend a day.

You asked, “How many people recognize the many ways each day they destroy life?” I think that most people are so disconnected from the natural world that they aren’t very mindful of their relationship with it. Your question reminded me of Val Plumwood’s book, The Eye of the Crocodile. She came very close to being eaten by a huge crocodile in Australia. Here’s a paragraph from my review:

Ecological animalism was the realm of crocodiles, Aborigines, our wild ancestors, and the rest of the natural world. All life was food, including humans. In an ecosystem, “we live the other’s death, die the other’s life.” Our bodies belonged to the ecosystem, not to ourselves. The spirits of animate and inanimate beings had equal significance.

The YouTube video of a James Scott lecture mentioned above is fascinating. It is based on a far more complete, and far more fascinating 45-page essay, which is available HERE.