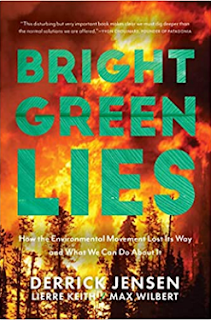 In an era when the info stream is running heavy on conspiracy theories, fake news, and balderdash, it’s not unusual to come across stories of green energy miracles.  For example, we might see that a progressive country somewhere overseas is now almost entirely running on wind or solar energy.  Oh, really?  In this era of deceptive “news” releases, truth can be a slippery rascal.

Bright green environmentalism is a mindset that has big hopes for a brighter future, and strongly advocates renewable energy.  Their primary interest is preserving our luxurious high-impact lifestyle and mega-profitable economy, while (hopefully) lightening our eco-footprint a wee bit, allowing us to feel slightly less uncomfortable.

The cat is out of the bag with regard to approaching fossil energy limits and the Climate Crisis.  The bad old-fashioned way of living has become unhip and embarrassing.  It has to go.  Bright green is a brilliant marketing strategy.  Look!  Here’s a new and improved way of living in the fast lane that’s friendly to the birds and trees!  It’s great for the economy, and it’s great for the planet!  Imagine that!  How totally cool!  (Um, the inconvenient truth here is that, no matter how hard we wish, we can’t have both industrial civilization and a living planet.)

Derrick Jensen, Lierre Keith, and Max Wilbert are the authors of Bright Green Lies, which enthusiastically reveals all the kinky and creepy aspects of the bright green cult.  The three wordsmiths are apostles of a gospel called Deep Green Resistance, which passionately advocates defending the living world, to the highest degree possible, without delay.  (“No, that doesn’t mean killing all humans.  That means changing our lifestyle dramatically.”)  OK!

Once I made it across the border into chapter three, I suddenly became extremely excited!  I found myself exploring a fascinating, in-depth “birds and bees” discussion of the unfortunate realities, drawbacks, and limitations of alternative energy — lots of stuff they never taught me in school (and I wish they were teaching now).

My Admiral TV was made in 1946.  It doesn’t have a screen the size of a barn door.  I’ve never seen it work.  Watching a dead TV is boring.  Reading is a lot more interesting.  When you spend 25 to 30 years studying ecology, anthropology, and environmental history, you can learn a lot of stuff that mainstream folks don’t know — stuff more important than football scores, soap operas, game shows, celebrity shenanigans, and so on.

Folks who have working TVs, and thousands of channels, are often very well informed about countless subjects that are not especially important.  They are unlikely to be up to date on difficulties of lithium recycling, or why Big Mama Nature loathes and despises notorious bright green billionaires, or why the electric grid is so poorly designed for effectively distributing renewable energy that is intermittent, unpredictable, hard to control, and a pain in the ass.

They are likely to be blissfully ignorant about most of the countless eco-impacts of their consumer lifestyles.  The view outside their picture window is not strip mines, clear-cuts, forest fires, methane craters, oil fields, toxic spills, chemical plants, and landfills.  Out of sight, out of mind.  Most importantly, they are unlikely to understand why running today’s industrial civilization entirely on renewable energy is absolutely impossible, and why attempting a transition would provide little or no benefit — but a lot more damage to the planet.

Of course, everyone remembers William Jevons, who discovered something very strange in 1865.  In those days, the steam engine industry was making big gains in efficiency.  More work could be done with less coal.  Instead of reducing coal mining, demand for coal increased, because it was the greedy and profitable thing to do.  Jevon’s Paradox asserts, “Increased efficiency not only doesn’t generally reduce demand, but instead increases it.”

Bright greens still dance to the Jevon’s boogie.  Richard York, a University of Oregon wizard, studied data from 128 nations, and found that for every unit of “green” power brought online, only one-tenth as much fossil fuel was taken offline.  “Industrial civilization requires industrial levels of energy, and fossil fuel is functionally irreplaceable.”  Electric cars can’t be made without it.  Nor can wind turbines, solar panels, planes, ships, concrete, cell phones, etc.  Oil is incredibly energy dense.

Solar power pauses for sunset or clouds, sometimes for days.  Wind turbines take a nap when it’s calm, sometimes for days.  Meanwhile, demand for electricity expects the grid to always provide our every need immediately, and demand can surge without warning.  This means that a conventional generation system (typically fossil powered) must constantly be kept running on standby, to immediately feed the grid when clouds pass, breezes calm, or demand suddenly spikes.  Brilliant, eh?

While coal or oil is energy that can be stored for millions of years, the grid delivers alternating current (AC) electricity, which is impossible to store — use it or lose it.  Batteries can store direct current (DC) electricity, but high capacity utility-scale batteries are not in common use.  There are other ways of storing energy, like hydro-electric dams, pumped hydro, compressed air, thermal, etc.  These can be used in unique locations, not everywhere.  Bottom line: “The grid was not built for renewables.”  Therefore, a new fantastically expensive state of the art grid is needed.

No storage systems are made of harmless green fairy dust.  All require a fossil energy powered industrial civilization.  In the world of batteries, lithium-ion is the most efficient.  Elon Musk is working hard to design and build lithium batteries for cars, homes, and industrial scale power storage.  Exponential growth in demand for lithium is predicted into the late 2020s and 2030s.

Some fear that staggering demand for lithium could drive prices into the stratosphere, and close the gate to a beautiful green utopia.  Even worse, some predict that “not enough economically recoverable lithium exists to build anywhere near the number of batteries needed in a global electric-vehicle economy.”  This also applies to other gizmos that require lithium.  Oh-oh!

The book explores a number of other subjects — power distribution grids, hydropower, recycling, green cities, biofuels, geothermal, and so on.  Near the end are 28 pages of “solutions,” all of which consumer society has zero interest in.  Consumer society wants to survive and grow until the planet can no longer breathe.  The authors suggest a more interesting path.

Put the plows away forever and bring back the grasslands, via holistic management (beneficial grazing).  Before long, the recovery of healthy wild vegetation will suck the excess carbon out of the air, and turn some of it into organic grass-fed meat.  Grass will save our ass!  Deal with overpopulation and extinctions.  Eliminate carbon emissions in five years.  Remove five dams per day and stop building new ones.  End logging.  And on and on.  In short, end the destruction, let the Earth heal.  Make America Walk Again.

Jensen has spoken to many audiences over 20+ years.  He asks each group the same question.  “Do you think this culture will undergo a voluntary transformation to a sane and sustainable society?”  No one has ever said yes.  This is exactly the point of his extreme recommendations.  There is no solution that leaves our way of life intact.  Our way of life has some really big issues.  This book will help you better understand some of them.  I liked it.

Planet of the humans was another recent production the pointed out the denial and disconnect in conventional environmental thinking.

Mr. Moore got sent to the woodshed for that little questioning the narrative film.

I don't know if I will read this one, I'm pretty sure I already know how this turns out.

The book is useful for understanding the shit and shinola flowing down the info stream. I learned some stuff from it. It's not for everyone.

Also see: We are Strip-Mining Life While We Drink “Bright Green Lies”: https://www.tree-of-life.works/bright_green_lies
as well as, "Between the Devil and the Green New Deal": https://communemag.com/between-the-devil-and-the-green-new-deal/ and

Also, (note to @Steve Carrow, too), here are several really top-notch takedowns of the ecologically clueless critics of "Planet of the Humans"... https://youtu.be/P8lNTPlsRtI?t=2644 (watch for a few minutes and take notes)

Hi Michael! I sent Steve a 32 page defense of Planet of the Humans. HERE

What happened to yesterday’s comment? I moderate comments, because without moderation, 99% would be spam. Exterminators in Nowhereville, New Mexico will post ads. So will safety net manufacturers in France. If I let them appear, there will be six more tomorrow, 30 more next week, and eventually 666 billion. I check for messages once or twice a day. No smart phone.

I’m writing reviews of Jamail and Wadhams, then I’ll return to WFH.

This book praises Salatin. Fair enough because he popularises some great ideas, and soil is important.

However, I think it is worth noting that some of the regenerative agriculture movement has been colonised by the billionaires. It's better than what it replaces, but when practiced at scale it is just another bright green dream (cattle trucks, refrigeration, etc.).

This book praises Salatin. Fair enough because he popularises some great ideas, and soil is important. There are some problems however (https://www.motherjones.com/food/2020/11/joel-salatin-chris-newman-farming-rotational-grazing-agriculture/)

In the light of this, I think it is worth noting that some of the regenerative agriculture movement has been colonised by the billionaires. It's better than what it replaces, but when practiced at scale it is just another bright green dream (cattle trucks, refrigeration, etc.).

Quoll Quest, I really appreciated what the book said about alternative energy, resource limits, mining impacts, etc. The solutions offered were a wish list — big theoretical ideas that society is not eager to pursue. I was surprised to see them recommending holistic management, given their track record of opposition to civilization, a system built on a foundation of plant and animal domestication. Environmental history has no complaints about wild herbivores, but finds many problems with owning and managing herds of domesticated livestock — a system in which wild predators are not welcome to exist.