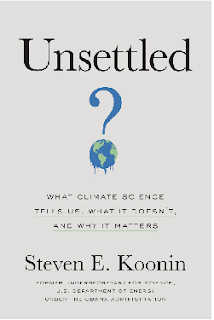 Steven Koonin’s Unsettled is an unsettling book.  I learned about it via a Facebook post, clicked my way over to Goodreads, and listened to the reader comment jungle drums.  Folks seemed to like it.  A few climate deniers wrote that the book had convinced them that the climate was actually warming.  Wow!  What could a book say that might communicate with them?  I promptly downloaded a copy of the Kindle version.

Koonin is a physicist who has worked for BP, Obama’s Department of Energy, and in academia.  He enjoys an unblemished reputation as a contrarian.  For him, climate change is “a possible future problem.”  The mainstream mindset constantly tells us that the science on climate change is settled (huge threat!).  Koonin insists that “The Science” is unsettled — reputable climate science has been highjacked by doom mongerers (but he does acknowledge that the climate is indeed warming).  The Trump administration once wanted to use him in a proposed media campaign to challenge mainstream perceptions about climate change.

Koonin is an expert at computer modelling, and he’s very interested in climate science.  Models are given a set of rules, and then selected data is fed into them for processing.  If significant trends appear, they can provide a basis for projections of the future.  Armed with compelling graphs, and a blizzard of statistics, he shines a spotlight on little known truths.  For example, “The net economic impact of human-induced climate change will be minimal through at least the end of this century.”

Actual reality is more complex than a collection of data points.  In the Arctic, bright white surfaces, like snow and ice, are very reflective (high albedo).  Earth is bathed with incoming solar heat every day, but albedo bounces about 30 percent of the heat back into outer space, so we don’t bake.  Darker surfaces, like forests or open water, reflect much less heat (low albedo).  The 70 percent of solar heat that reaches the planet surface helps to keep the climate at temperatures that enable life as we know it.  This is an amazing balancing act.

Because the climate is warming, especially in the Arctic, the glaciers, ice pack, and sea ice are busy melting and retreating — exposing darker surfaces, like dry ground and seawater.  So, less heat is bounced away, and more is absorbed, leading to rising temps.  The warmer it gets, the faster the melting, which raises the warming, which speeds the melting — a vicious circle.

The atmosphere also plays a starring role in the balancing act.  Greenhouse gases include carbon dioxide (CO2) methane (CH4), nitrous oxide (N2O), and water vapor (H2O).  In the atmosphere, they provide a comfortable insulating blanket that retains much of the heat radiating upward from the Earth’s surface.  This process beneficially contributed to the balancing act until the industrial era, when greenhouse gas emissions intensified, and heat retention began increasing.

Warming affected permafrost.  Consider the area of the 48 U.S. states that lie between Canada and Mexico.  In the Northern Hemisphere, permafrost underlies an area almost 2.5 times as large as the 48 states.  In the Arctic, vast deposits of it, which can be many thousands of years old, exist beneath both dry ground and offshore waters.  Permafrost is a mix of frozen soil and organic material (plant and animal).  When it warms, it thaws (not melts).

With thawing, land that was once strong and solid becomes more pudding-like.  Towns decompose, villages slide into the sea, pipelines fall apart, and hills release landslides (exposing mammoth bones).  Microbes feast on the defrosted organic matter, and then emit methane.  Methane is an extremely potent greenhouse gas.  In the atmosphere, it survives for 7 to 10 years before breaking down into CO2, which is less potent, but can remain airborne for many centuries.

On the bottom of northern seas, permafrost lies beneath layers of sediment.  Sediments contain frozen crystals of methane hydrates (or clathrates), which look like ice, but can burn.  Seabed hydrate deposits in the Arctic are estimated to contain 13 times the amount of carbon that’s currently present in the atmosphere.  As rising temps melt the bright surface of sea ice, darker seawater becomes exposed to daylight, and absorbs heat.  When seabed waters warm, the crystals melt, and methane gas is released.  In deeper waters, the plumes of methane bubbles dissolve while rising.  In shallow waters, methane bubbles make it to the surface, and enter the atmosphere.

As the Arctic climate continues warming, it’s possible that a catastrophic release of methane could be triggered.  Folks who pay attention to this stuff are nervous.  They are monitoring the East Siberian Arctic Shelf — 810,000 square miles (2.1 million km2) of shallow waters in methane country.  The shelf covers an area more than five times larger than California.

So, why don’t we just slow down greenhouse gas emissions?  Here, we collide head-on with a monumental bummer.  Koonin wrote (2020) that in the atmosphere, CO2 levels are 415 parts per million (ppm).  Each year, about 37 billion tons of CO2 are emitted.  At this rate, the concentration in the atmosphere would increase by about 2 ppm in a year.  Year after year, more is added.  These emissions remain in the atmosphere for centuries (!) — so their concentration continuously grows.  He calculated the trajectory of current greenhouse gas emissions, and concluded that they would double by 2075.

In his book, The Great Acceleration, environmental historian J. R. McNeill said it differently, “Some proportion, perhaps as much as a quarter, of the roughly 300 billion tons of carbon released to the atmosphere between 1945 and 2015 will remain aloft for a few hundred thousand years.”  By 2008, concentrations had grown by 25 percent in just 50 years.  Of the emissions caused by humans, about 85 percent was related to fossil fuels.

Koonin contemplated where the path of continuous accumulation would lead.  He reflected on humankind’s massive addiction to fossil fuels.  Would we ever willingly back away from our high impact way of life, as long as it’s still possible?  No!  We’ll bet heavily on hope, and patiently wait for technological miracles, until the lights go out.  Suddenly, a divine revelation arrived.  The notion that we could stabilize current CO2 emissions in the coming decades was simply not plausible — and forget actually reducing them.

“Modest reductions in emissions will only delay, but not prevent, the rise in concentration.”  If greenhouse gases continue their out of control accumulation, less heat will escape, the climate keeps warming, the Arctic keeps melting, albedo keeps decreasing, and the climate keeps getting warmer and warmer.  We’ve started something we can’t stop.  Yikes!  Never fear!  Koonin pulls three “solutions” out of his magic hat.

Solar Radiation Management (SRM) would artificially increase albedo by frequently dispersing tons reflective substances high in the sky, year after year, forever.  The Artic would quit melting, and humankind could live happily ever after.

Carbon Dioxide Removal (CDR) uses technology to extract the surplus CO2 from the atmosphere, and put it somewhere secure, where it will cause no mischief for a million years.  A few small pilot projects are underway, and they have serious limitations so far.

Geoengineering is a word used to describe processes like SRM and CDR.  If one or both turn out to be miraculously successful, humans could, in their wildest dreams, continue burning fossil energy, and living like there’s no tomorrow.  In reality, neither is a proven success, nor cheap, easy, or sustainable.  Both ideas make lots of people nervous, for a wide variety of intelligent reasons.  Unintended consequences are guaranteed.

Luckily, there is one tried and true, all-purpose solution that humans have relied on for countless thousands of years — adaptation.  Courage!  Migrate to a region where you won’t starve, turn to ice, roast alive, or drown in rising seas.  Learn how to walk.  Become a great forager.  And so on.

Doom mongerers warn that human influences will eventually push the climate beyond a tipping point, at which time catastrophe will ring our doorbell.  Koonin writes that it’s unlikely that human influences will push the climate over a tipping point.  “The most likely societal response will be to adapt to a changing climate, and that adaptation will very likely be effective.”  If adaptation isn’t enough, we can always throw all caution to the wind, and fool around with geoengineering.

So, Koonin introduced readers to the notion of albedo, rising temperatures, melting Arctic, less albedo.  Great!  He came extremely close to the powerful punch line, but then suddenly swerved off into a head spinning whiteout blizzard of statistics and graphs.  His viewpoint is based on data collections — statistics on temperatures, precipitation, storms, etc. — stuff that computers can process (36 red dots, 55 blue dots…).

A great benefit of Kindle books is that they are searchable.  I searched the book for a number of essential climate science keywords, and discovered zero hits for: Peter Wadhams (Arctic researcher), permafrost, methane hydrate, methane clathrate, methane craters, ocean acidification, ocean deoxygenation, East Siberian Arctic Shelf, pine beetles, tree death, threshold temperatures (too hot for agriculture), etc.  A whole bunch of essential information is absent in the book, and it may be an invisible elephant in the room.  Could doom mongerers actually be reality mongerers?

Reading this book was an interesting experience for me.  It made me question my views (all survived).  I learned a few new things.  Koonin is a purebred scientist, absolutely dedicated to the holy quest for truth.  The long and winding upward path to sacred certainty passes through numerous challenges and arguments that eventually weed out the dodgy ideas.  The Steven Koonin article in Wikipedia [HERE] provides ringside seats to the debate — links to commentaries by some of his critics who also have respectable credentials.

Posted by What Is Sustainable at 9:19 AM