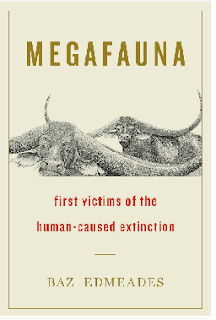 Megafauna is an important, fascinating, unforgettable, one-of-a-kind book.  It primarily focuses on prehistoric megafauna extinctions around the world, and how they happened.  Baz Edmeades (“ed-meedz”) has been working on this book for 20+ years, and it is impressively thorough.  His grandfather was a professor who found a unique human-like skull that was about 259,000 years old.

During the last two or three million years, lots of megafauna species, all around the world, have moved off the stage forever.  Why?  A heated debate has been buzzing for 50+ years.  Was it an asteroid strike?  No evidence.  Were they zapped by diseases?  No evidence.  Was it climate change?  It probably strained some regional situations.  Was it human activities?  The evidence strongly supports this.  In 1966, Paul Martin presented his megafauna overkill theory (humans did it), which ignited big controversy in academia.  Edmeades became friends with Paul Martin, and learned a lot from him.

Hominins originated in Mother Africa, where there used to be at least nine species of big cats (three today), nine types of elephants (one today), and four hippos (one today).  There were giant antelopes, giant hyenas, giant pigs, giant monkeys, and giant baboons — all gone.  Extinction spasms especially surged as humans wandered out of Africa, and gradually colonized the planet.  They migrated across Southern Asia, to Australia, then Eurasia, and finally the Americas.

Paul Martin coined the misleading term “blitzkrieg overkill,” which angered quite a few folks.  As humans colonized new regions, the megafauna declined in number, in a process that could take a thousand years or more, multiple generations.  It was not a high-speed massacre.  These hunters were Stone Age people, using simple tools.  Many of the large game they hunted had low reproductive rates, which made them extremely vulnerable to extinction.

There is a clear pattern that when hunters migrated into continental land masses, stuff went extinct — except on uninhabited (human-free) offshore islands of the Mediterranean, Caribbean, and elsewhere.  On these islands, extinctions didn’t begin until humans eventually stepped ashore, sometimes thousands of years later.  Understand that offshore islands have a climate quite similar to the nearby mainland.  Climate was not a factor here.  Many of the megafauna species that blinked out had survived multiple ice ages over the passage of several million years.

In 2015, I stumbled across early sections of the Edmeades book online, and they blindsided me.  I never understood how incredibly alive this planet once was, and how tragically damaged it now is.  None of my teachers ever explained this, because they never learned it.  Our cultural myths celebrate the upward spiral of humankind’s brilliant achievements.  We live in a technological wonderland, not an ecological graveyard.  Life has never been better, and the best is yet to come.

The ancestors of hominins were originally tree dwellers.  Our closest living relatives are chimps, with whom we share 98.8 percent of our DNA.  Long ago, when the climate changed, and forests shrank, our ancestors were forced to survive as ground dwellers, a lifestyle for which evolution had not prepared them.

Over the course of several billion years, evolution has been a remarkable force that guided the journey of the family of life.  When frigid eras arrived, critters evolved fur coats.  When foxes became faster, evolution selected for faster bunnies.  It was a balancing act.  Foxes needed bunnies, and bunnies needed foxes.  The family of life was continuously fine-tuned at the speed of evolution, an extremely slow process.  Alterations could take many thousands of years.

Over millions of years, evolution provided giant tortoises with large bodies, invincible lion-proof shells, and long lifespans.  In the blink of an eye, these advantages were rubbished when hominins moved into the neighborhood, and began killing 200-year-old tortoises with big rocks.  This hunting method was not fine-tuned by evolution.  It was a sudden innovation that popped into the mind of a hungry hominin — and it worked!  Invincible tortoises were immediately transformed into helpless sitting ducks that didn’t have a bright future.  Evolution was yanked out of the driver’s seat.  Ancient rules no longer mattered.

Hominin cleverness changed the world.  It made it far easier to grab essential resources, grow in numbers, and avoid becoming cat food.  Cleverness had the long term impact of an asteroid strike.  Cleverness enabled hominins to domesticate fire, plants, and animals.  We colonized the planet, developed industrial civilization, zapped the forests, polluted everything, and destabilized the climate.

Many folks in the human herd suffer from a blind faith that the miraculous power of cleverness can easily overcome all challenges.  Their vision is to keep our maximum impact way of life on life support, as long as possible, and hope for the best.  Edmeades presents no solutions, but this is a story that was important to tell.  He laments that cleverness “has given our species the power to transform the biosphere so profoundly that no other organism on this planet may get the opportunity of evolving it again.”

His book does an excellent job of discussing the megafauna extinctions in an understandable way, with up-to-date information.  Its bitter medicine, and good medicine.  Many misperceive evolution to be a divine competition, in which species fight relentlessly to reach the top of the hierarchy, seeking to wear the Dominant Animal crown.  This pyramid-climbing quest for domination is the engine of civilization.  By the end of the book, you understand that evolution is more about adapting to changing conditions in a way that is as smooth and balanced as possible.

Evolution has been the great friend of the family of life.  The Dominant Animal game has been its grim reaper.  While the wild megafauna are now sharply diminished, human-caused extinctions of many other species continue at an accelerating rate.  Cleverness never sleeps.  I’ve spent 69 years in a roaring hurricane of devastating cleverness.  Edmeades book reminded me that this planet was once a healthy and amazing living paradise.  Some of my genes have their roots in those good old days of abundant life.  That’s a comforting notion.

Posted by What Is Sustainable at 11:39 AM

Fascinating review of Baz's book. It has had a profound impact on how I see myself in the ecology and has also resulted in my spending more time reading books he references than the fiction I usually distract myself with.

Humans: the scourge of life. Cleverest killers on the planet. Every single one of us. It's what we do. There are life-supporting ways to live that the vast majority of humans consistently refuse to adopt to any globally significant extent.

Agreed. It's in our DNA - our unknowing destructive behaviour to secure our own procreation and survival, but there IS a shift - as Baz says - there are many of us who have realised that we need to do things differently and have already begun to do so. To me all the campaigns to save species and stop the destruction are essential to build critical mass of understanding. There's still a long way to go, with vested interests fighting back, greenwashing, undermining, but the compelling message is that we CAN DO it. My fear is we'll run out of time before we achieve it.

Chapter 13 in Megafauna discusses the domestication of fire. The entire family of life is solar powered. Sunbeams feed the plants, and plants feed the animals. Trees (firewood) are sunbeam beings. Flames are stored sunlight. Fossil energy is sunbeams sequestered millions of years ago. When a clever hominin learned how to kindle a flame, the future was rewritten. Evidence of fire use in caves dates back to 1.5 million years ago.

Much later, fire enabled humans to colonize temperate regions in Eurasia and the Americas, places too cold for furless tropical animals. Jared Diamond noted that most of the wild plants and animals suitable for domestication lived in Eurasia, where farming and herding commenced, setting the stage for civilization. Jared Diamond wrote that in Africa, no large mammals were domesticated south of the Sahara — in this region only the turkey-like guinea fowl was domesticated. If hominins had remained in their homeland in Mother Africa, and never learned fire making, imagine what the world would look like today.

Edmeades: “It takes a great deal of solar energy to synthesize the carbohydrates — the sugars, cellulose and lignins — that go into the making of a tree. Enormous benefits would have accrued to the hominins who learned how to unlock the energy packaged into those carbs by means of setting fire to wood.”

Hi Unknown. I'm not sure that DNA (hardware) is the defect. It seems to me to be a software problem, culture, learned beliefs, etc. I agree that there is an enormously long way to go, and we don't enjoy unlimited time.

Well we don't know what we don't know.so like Darwen on the origin of the species, was wrong.
This pyramid-climbing quest for domination is the engine of civilization.
And there are pyramids on every land in the world , and people still don't know what they were built for and why.
Yes there has been many cultures that were on earth that knowledge has been Lost. That when their building's or like stone hedge we don't know or understand the technology.

I think the substain message with Michael doom is correct, there are many cultures that have failed in substainabiliy, like the following .

Teotihuacan is a vast Mexican archaeological complex northeast of Mexico City. Running down the middle of the site, which was once a flourishing pre-Columbian city, is the Avenue of the Dead. It links the Temple of Quetzalcoatl, the Pyramid of the Moon and the Pyramid of the Sun, the latter two with ― Google… More

I wrote about the Axtecs in sample 35.
HERE

Yep I reread it , the many cultures that were not sustainable,, go backwards 10,000 years. Forgotten about