Under a White Sky 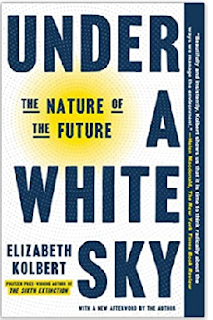 Elizabeth Kolbert, author of the Pulitzer Award winning The Sixth Extinction, has written a potent new book, Under a White Sky.  She sums it up as “a book about people trying to solve problems created by people trying to solve problems.”  So much of what we do echoes the plot of the Sorcerer’s Apprentice folktale — vivid imaginations, half-baked cleverness, dangerous overconfidence, and zero foresight result in frightening unintended consequences.  Kolbert puts on a journalist uniform, and visits the wizards on the cutting edge of ingenious technology.  She presented eight scenarios of human hubris.

Two are about climate change.  The title, “Under a White Sky,” is a reference to her discussion of SRM.  Solar Radiation Management is what is usually meant by “geoengineering.”  The goal of SRM visionaries is to reduce the rate of atmospheric warming by bouncing away a significant portion of the incoming solar radiation.  To do this, they envision dumping a million tons of highly reflective particles into the stratosphere each year — 40,000 planeloads of sulfur dioxide, calcium carbonate, or something.  Some fear that SRM would turn the blue skies white.  What could possibly go wrong?  I need to put this in context.

Petroleum geologist Walter Younquist noted that in less than 500 years, we’re going to burn up the oil, gas, and coal that took more than 500 million years to create.  It took 109 years to consume the first 200 billion barrels of oil, ten years for the second 200 billion, and six and a half years for the third.  Of all the oil ever consumed, 90 percent has been used since 1958.  We’re taking a high speed one-way joyride into the deep unknown, with no brakes, and no understanding.

Alice Friedemann explained why life as we know it would be impossible without fossil energy.  Many core processes cannot be run on electric power — trucking, shipping, air travel, manufacturing, agriculture, mining, and so on.  Wind turbines, solar panels, and high capacity storage batteries have limited working lifespans, and making them requires high impact processes and materials.  They are “re-buildable,” not “renewable.”  The current electric grids of the world were not designed to reliably function on intermittent inflows of energy.  So, the global transition to happy “green” energy would be a monumental undertaking.

The atmosphere is already overloaded with greenhouse gases, and we constantly add more.  This leads to a perpetual downward spiral.  As the gases accumulate, the atmosphere retains more heat, shiny white ice sheets keep melting, so less incoming solar heat is reflected away, so the atmosphere gets warmer, so more ice melts…, etc.  Vast regions of permafrost are beginning to thaw, allowing ancient organic material to decompose, and emit methane.  Vast undersea deposits of frozen methane hydrates are beginning to melt, sending even more methane into the atmosphere.  Consequently, this is why the planet’s formerly tolerable climate is shape-shifting into a furious city-smashing movie monster.

It’s important to understand that the carbon released into the atmosphere does not quickly dissipate, it accumulates.  Environmental historian J. R. McNeill wrote, “Some proportion, perhaps as much as a quarter, of the roughly 300 billion tons of carbon released to the atmosphere between 1945 and 2015 will remain aloft for a few hundred thousand years.”  If all of humankind camped on Mars for 50 years, the warming cycle on Earth would not promptly stop.

Not everyone is an enthusiastic fan of SRM.  As the planet continues warming, more flights will be needed to release more tonnage of reflective particles.  What goes up, must come down.  Could falling dust harm our lungs?  If sulfur dioxide particles were used, this could damage the ozone layer, and add sulfuric acid to the rain.  The bottom line is that SRM does not eliminate the primary cause of climate change — massive ongoing emissions of carbon compounds.

Kolbert also discussed a theoretical solution to the climate crisis.  She visited the brave new world of Direct Air Capture (DAC).  It involves extracting the carbon from the atmosphere, and injecting it deep underground at locations with ideal geology, where it would mineralize into calcium carbonate, and harmlessly stay there forever.  One plan involved building 100 million trailer sized DAC units around the world.  It sounds like a miracle, the answer to our prayers.  We can save the world and keep living like lunatics too!

In another scenario, she discussed Chicago’s heroic war on Asian carp.  The city is a ghastly disaster area that generates enormous amounts of sewage, garbage, pollution, and toxic waste.  Years ago, the Chicago River was used to conveniently move lots of crud into Lake Michigan, where it would be out of sight, out of mind, and out of nose.  Eventually, a few oddballs began to wonder if this was intelligent.

Luckily, experts solved the problem by changing the course of the flow.  They began sending the filthy dreck down the new Chicago Sanitary and Ship Canal, which would eventually dump it into the Mississippi River, which is far less sacred to many Americans.  Unfortunately, the river is home to four species of Asian carp, some of which can weigh up to 100 pounds (45 kg).  In the Mississippi, when motorboats pass by, numerous carp leap high into the air, sometimes injuring fishermen, and knocking boaters overboard.  Waterskiing has become an especially dangerous activity.

Unfortunately, Chicago’s alterations to the flow of filth was not a flawless design.  It was theoretically possible for carp to migrate into the Great Lakes.  The carp are so good at extracting plankton that it was possible they might deplete food resources that enabled the survival of indigenous lake fish.  If they spread throughout the Great Lakes, it would be a death sentence for sport fish like walleye and perch.  This upset some folks.  Rachel Carson opposed poisoning the new canal, so they installed electrified underwater fences to electrocute the carp.  What were Asian carp doing in the Mississippi?  In 1964, the U.S. Fish and Wildlife Service imported the fish to control exotic aquatic weeds.  How smart was that?

Kolbert also spent time with folks engaged in genetic engineering.  The cool new CRISPR technology enables them to make green chickens.  Other gene splicers want to resurrect the extinct passenger pigeon.  My father was in diapers when the last bird died in 1914.  Some estimate that there were once 3 to 5 billion passenger pigeons.  In 1800, they may have been the most numerous birds on Earth.  The pigeons were forest animals, and their primary food was mast — nuts and berries that grew on trees and woody brush.

A. W. Schorger (1884-1972) wrote an outstanding book on pigeon history.  He mentioned a 1663 report from Quebec, noting that one scattershot blast into a dense flock could kill up to 132 birds.  Some migrating flocks, a mile wide (1.6 km), and miles long, darkened the sky for up to three days.  Folks could hear the roar of countless wings before the flocks came into view.  They could fly up to 62 miles per hour (100 km/h).

Farmers hated the huge flocks that generously assisted at harvest time.  Market hunters adored them as an easy way to make money.  In 1913, William Hornaday wrote, “In 1869, from the town of Hartford, Michigan, three car loads of dead pigeons were shipped to market each day for forty days, making a total of 11,880,000 birds.  It is recorded that another Michigan town marketed 15,840,000 in two years.”

Should we bring the pigeons back from extinction?  Forests were where they nested, where they roosted for the night, and home to their primary food resource, nuts.  While the hunters were taking a devastating toll on the birds, others were obliterating their habitat.  Loggers eagerly turned forests into gold.  Farmers nuked forests to expand cropland and pasture.  Explosive population growth converted forest ecosystems into hideous hotbeds of industrial civilization.  Greetings GMO pigeons!  Welcome to our nightmare!  Enjoy your resurrection!

Kolbert’s book is easy to read, not too long, provides us with a provocative look in the mirror, and encourages us to reexamine our blind faith in unquestioned beliefs.  She gave us a pair of dueling quotes.  Hippy visionary Stewart Brand once asserted, “We are as gods and might as well get good at it.”  This annoyed biologist E. O. Wilson, who responded, “We are not as gods.  We’re not yet sentient or intelligent enough to be much of anything.”

A one hour interview with Kolbert discussing this book is [HERE].  The message is, if you’re not pessimistic about the future, you’re not paying attention.

Kolbert, Elizabeth, Under a White Sky: The Nature of the Future, Crown, New York, 2021.

Posted by What Is Sustainable at 1:08 PM

Nothing engineers can do matters because it is too late. Science and events have been telling us that for decades. It's insanity to think that what caused this tragedy can get us out. That's the lie promoted by capitalism.

Yep this is a great idea 😊💡 and summary


human supremacy, and the super-spooky mind-altering power of unquestioned beliefs. Humans are the only things that matter, a living planet does not. Earth is a disposable stage prop for the heroic stars of the show, the comically clever primates.

From this mindset, the human colonization of Earth (a process that has left behind a long and bloody trail of extinctions, spurred explosive population growth, rubbished countless ecosystems, and triggered an onrushing climate catastrophe) is seen as a wondrous achievement that should fill us with glowing pride. We have blind faith that technology will always sweep aside every challenge on our path. Indeed, the best is yet to come!