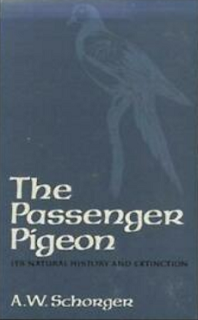 Once upon a time, North America was home to an estimated five to eight billion passenger pigeons.  They may have been the most numerous bird species in the world.  My father was in diapers when the last one died in 1914.  I was born in Michigan, where immense flocks had once thrived, prior to the invasion of farmers and loggers in the early 1800s.  Today, our culture has largely forgotten the saga of the passenger pigeons.  We still remember the war on bison, which is somehow seen as more heroic and dignified.

Lately, some genetic engineers have been talking about resurrecting the extinct birds.  Huh?  Would that make any sense?  Their natural habitat is long gone, and their return would not be appreciated by farmers, airline pilots, and many others.  Curiosity forced me to read two pigeon books.  It was an illuminating and disturbing experience.

A. W. Schorger (1884-1972) wrote The Passenger Pigeon, which especially impressed me, because he was totally obsessed with this subject.  He devoted 15 years to research, exploring over ten thousand sources — books, journal articles, newspaper clippings.  He actively sought informants, and corresponded with many old-timers who had been near the front lines in the war on birds.  Passenger pigeons inhabited the eastern U.S., and southeastern Canada.  Wikipedia provides a good overview, and a map of their habitat [HERE].

Their primary source of food was mast — nuts, seeds, berries, and fruit produced by trees and woody brush.  The two most important foods were acorns and beechnuts.  Acorns were swallowed whole, and up to 17 could be stored in the bird’s crop.  By morning, they would be digested.  When winter grew old and tired, flocks migrated northward, as the retreating snow exposed a buried treasure of yummy nuts.

Pigeons also raided farms.  In the early days, at planting time, seeds were broadcast by hand (tossed on the ground surface).  Then, hungry flocks would zoom in and eagerly devour them all.  They loved corn and wheat, but buckwheat was their favorite.  Farmers sometimes burned thousands of acres of trees to discourage flocks from roosting close to their fields.  Later, they switched to sowing devices that covered the seeds with soil.

Flocks did not visit the same areas annually, because oak and beech forests did not reliably produce nuts year after year.  Birds might not return to the same place for 11 years.  Nut trees were smart.  By being unpredictable, hungry flocks could not become permanent parasites.  This enabled enough nuts to germinate, sprout, and maintain the survival of the species.  For pigeon flocks, life was a never ending search for free lunches.  They followed their stomachs to delicious locations.

Observers calculated that enormous flocks zoomed across the sky at about 60 miles per hour (96 km/h).  They constantly scanned the land they flew over, in search of nourishing treasures.  Flocks were most vulnerable when on the ground, where they were prey for predators like wolves, foxes, lynxes, cougars, raccoons, and humans.

They were far safer when perched in trees, or flying.  Airborne predators included eagles, hawks, and vultures.  A solitary pigeon would have been an easy lunch.  It was much safer to fly within a fast moving mob of a million friends.  Large flocks were not one solid mass, they separated into multiple tiers of birds, layers maybe spaced a foot apart (30 cm).  At high speed, these densely packed clusters moved fluidly in unison — swerving, diving, soaring, and bending.  This made predation difficult.

Large flocks of birds required large amounts of food, so they had to keep moving.  Nights were spent safely roosting in trees.  In the morning, smaller groups scattered across the land to forage.  They might travel 100 miles (160 km) before returning to roost for the night.  If one group discovered a location that contained abundant food, the larger flock would somehow learn this, and join the feast.  When a banquet concluded, the flock took wing and searched for a new place to roost for a while.  Passenger pigeons were nomads, no permanent address.

In Kentucky, observers described a huge roosting site 40 miles (64 km) long, and 3 miles wide.  When large flocks roosted, birds covered every limb, sometimes several layers deep, standing on the backs of others.  Their weight snapped off large limbs.  Sometimes entire trees fell over.  Some forests looked like a tornado had passed through — thousands of acres of dead trees.

Descriptions of migrating flocks, in unbelievable numbers, strain the imagination.  But millions of people saw them.  Flocks often stretched as far as the eye could see, from horizon to horizon.  They might block out the sun for several days.  People could hear the approach of flock that was still 4 miles (6.4 km) away.  The sound of a million wings was deafening, “like the roar of distant thunder.”  John James Audubon, naturalist and artist, calculated that one flock had more than a billion birds.  Someone else watched a flock in Kentucky that sped across the sky for 14 hours.  It was a mile wide and more than 300 miles (483 km) long.  The flock continued on the following day.

Roosting sites were inhabited until food in an area became scarce, then the flock moved on.  Nesting sites required a longer stay, so they were located where food resources were especially abundant.  They were close to water, sheltered from the wind, and often on islands.  A vital process was performed at nesting sites, reproduction.  Nests were built in trees, eggs laid, and squabs (chicks) hatched.  Flocks nested at least once a year, and most observers reported that just one egg was laid per nest.

Nesting sites varied in size, but large colonies were typical.  There was safety in numbers.  Pigeon cities could have a hundred million birds or more.  They might inhabit an area ten miles long and three miles wide (16 by 4.8 km).  Tree limbs were crowded with nests.  If a winter storm blew in, or if hunters began shooting, the entire colony might suddenly abandon their nests and squabs.

Nesting was synchronized.  Colonies gathered and nests were built.  Almost all of the eggs were laid on about the same day.  Parents took turns keeping the squabs warm under wing, while the other parent brought back food.  Squabs grew rapidly, remaining in the nest for 13 to 15 days.  At this point, parents brought squabs their last meal, and then departed from the nesting area in a great mass.  It was up to the squabs to learn how to fly.  They were fairly helpless, and predators were happy to eat them.  Their bodies were loaded with fat.

Native Americans were grateful for the pigeons.  They caught birds with nets.  Nesting sites were primary locations for getting birds.  They used poles to knock squabs from their nests.  Nesting trees were sometimes cut down to access the numerous squabs.  Tribes collected the fat from squabs, stored it, and used it like butter.  Pigeons played starring roles in tribal myths and legends.  There were taboos against prematurely disturbing nesting sites, and scaring away the adults before the young had hatched.

Early explorers (1534) reported large passenger pigeon populations.  They were the most common birds on Manhattan Island in the 1620s.  In the 1800s, the tide changed.  Settlers were encouraged to conquer and demolish the wild frontier.  In 1849, free land was given to folks who drained wetlands (prime nesting habitat).  New telegraph systems enabled social networking, announcing the location of nesting sites.  New railroads enabled industrial scale pigeon hunting.  Millions of birds could be quickly shipped from rural areas to big cities.  Sometimes tons of squabs were dumped in the river due to spoilage.  Unsold birds were fed to pigs.

Hunters used ducking guns with six foot barrels, double barrel shotguns, and large blunderbusses.  A single shot might kill 132.  A Wisconsin hunter shot 1,458 birds in one day.  Lads skilled with nets could capture up to 6,000 birds per day.  Many birds were killed for their feathers alone, which were used for bedding.

By the 1870s, bird numbers were obviously declining.  Some folks suggested conservation efforts, but few really gave a <bleep>.  Money makes civilized people crazy, and an ambitious lad could make big money selling squabs for 30¢ a dozen.  The last wild flocks were gone by 1889.  They had been massacred far faster than they could reproduce.  Schorger sighed, “Persecution was unremitting until the last wild bird disappeared.”

Over and over again, natural history teaches us that genetic evolution works slowly and beautifully.  When the species in an ecosystem coevolve over the course of thousands of years, the journey is far more likely to develop a sense of balance and harmony.  Over and over again, reality teaches us that a society obsessed with wealth and status is a fast path to a dead end.  Why don’t schools teach this?  How can we see where we’re going if we don’t know where we’ve been?

Yep, it's almost like what was done to the buffalo, exploited untill they almost gone.
Well we now live in a culture where technologies dominant the present with the promise of eternal life thru technologies