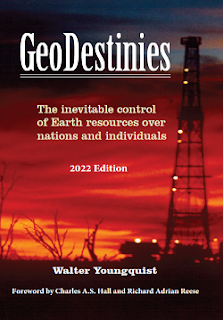 Walter Youngquist (1921-2018) was a petroleum geologist, a University of Oregon professor, and my friend.  His life’s masterpiece is a 600 page book that’s now available to everyone as a free PDF download [HERE].

Geologists study Earth resources, many of which are being degraded and depleted — aquifers, topsoil, hydrocarbons, minerals, etc.  These resources have limits.  Every drinker learns that the glass starts full, ends empty, and the faster you drink it, the quicker it’s gone.  Consumers pay little attention to resource limits, but they’re beginning to comprehend the impact of carbon emissions on the climate.  Mainstream experts repeatedly tell us not to worry.  They preach a fervent blind faith in miracles — a smooth and easy transition to a clean, green, renewable utopia.  Geologists wince.

Youngquist didn’t believe in miracles or techno utopias.  Today, we’re living dangerously fast by destroying astonishing amounts of nonrenewable resources — a onetime binge that can never again be repeated.  Nonrenewable energy is finite.  We have been soaring in a beautiful dream world, where the air is perfumed with the intoxicating aroma of a nonrenewable prosperity.  The era of cheap energy is fading away in the rear view mirror.

In 1973, the Eugene newspaper wrote a story about one of his lectures, “Dark Picture Painted by Youngquist.”  He gave many talks to Chamber of Commerce groups, trying to introduce them to the concept of limits.  He was almost never invited back.  America worships perpetual growth at any cost.  Growth is our god word.

In the mid-1990s, a number of the world’s petroleum geologists became alarmed that the volume of new oil discovered was declining, while the volume of consumption continued soaring.  This inspired the dawn of the Peak Oil movement, a wakeup call.  In 1997, Youngquist published GeoDestinies, which quickly sold out.  Folks begged him to print more, but Walt was reluctant.  He wanted to update the info first, but the story was moving faster than he could type.

Finally, in 2012, he finished the update.  Unfortunately, the process hit some curves.  The book did not get to a printer, Walt died, the publisher went extinct, and the manuscript gathered dust.  In 2022, a small group of fans was able to get a digital copy, and make it available to the world.  Most of the content is still timely and very important.  For most readers, this book is largely going to be a banquet of new information, important stuff that’s rarely taught in school, if ever.

Today, many snicker at the Peak Oil dimwits.  Dudes, we didn’t run out!  We’ll always find more!  In the ’90s, the industry was primarily producing cheap and easy conventional oil (insert a straw and suck).  It appears that the global production of this oil peaked around 2005.  Unfortunately, mad scientists developed new technology for extracting oil, like hydro-fracking and horizontal drilling.  This enabled a sharp increase in the production of unconventional oil from sources including tar sands, heavy oil, shale oil (tight oil), and deep water wells.  This oil was far more challenging and expensive to extract (and the mother of many bankruptcies).

In addition to declining discoveries, a new boogeyman is EROEI (energy returned on energy invested).  It takes energy to extract fossil energy.  For example, a hundred years ago, the EROEI for conventional oil was very high.  Ram a drill into a huge pool of Texas oil, and a geyser of black gold often shot high in the sky.  Today, with the shift toward unconventional oil, the EROEI is far lower and declining.  As the energy needed for extraction approaches the energy content of the output, the industry moves closer to its expiration date.  A lot of fossil energy will be left in the ground forever.

It took more than 500 million years for geologic forces to transform plant and animal residue into fossil fuels — coal, oil, and natural gas.  It will take less than 500 years for humans to extract it and burn it.  We live during a brief blip in Earth history, an ecological hurricane.  Walt’s core message was a blunt warning.  “The momentum of population growth and resource consumption is so great that a collision course with disaster is inevitable.  Large problems lie not very far ahead.  …In some respects, the twenty-first century will be like the twentieth century in reverse.”

The public believes that adequate “renewable” substitutes will be available when needed.  Alternative energy is not clean, green, and free.  The hardware components have limited working lifespans.  Scaling up to replace nonrenewable energy would require vast land area, roads, power lines, and backup for when adequate wind or sunbeams are unavailable.  Manufacturing solar panels requires critical minerals like cobalt, gallium, germanium, indium, manganese, tellu­rium, titanium, and zinc.  Each wind turbine requires tons of concrete, steel, and other resources.

Walt described the alternative energy options, and their many limitations.  He concluded that renewable energy will not come close to replacing fossil energy.  In 2021, Alice Friedemann presented a far more thorough discussion in her book Life After Fossil Fuels.  A renewable utopia seems impossible.

Oil is just one of many Earth resource topics in Walt’s book.  Plants and animals don’t need it.  Less than 200 years ago, oil was of no great importance to anyone anywhere.  For many thousands of years, nomads wandered across the Arabian Peninsula, under which laid oceans of ancient oil.  It never occurred to them to extract it, burn it, blindside the climate, and race down crowded highways in powerful motorized wheelchairs.  Naturally, in those days, the planet was in far healthier condition.  Then, in the twentieth century, Arabia became very rich, very fast.

Other resources are genuinely essential for the survival of the family of life — soil, water, air, and sunlight.  Of all minerals, soil is the most precious by far.  Fertile soil is created so slowly that, from a human perspective, it’s essentially nonrenewable.  In his book Dirt, geologist David Montgomery wrote, “Continued for generations, till-based agriculture will strip soil right off the land as it did in ancient Europe and the Middle East.  With current agricultural technology though, we can do it a lot faster.”  Peter Salonius studied soil for 44 years.  He concluded that all extractive agriculture, from ancient times to the present, was unsustainable.

The problems associated with soil destruction are widely understood, and widely disregarded.  Nobody became a billionaire by promoting soil conservation.  Globally, billions of tons are lost every year.  Overall, one-third of the soil on U.S. cropland has been lost over the past 200 years.  Half of the excellent topsoil of Iowa is already gone.  The highest quality soil is close to the surface, and the first to erode.  Walt wrote, “Worldwide, the con­tinuing loss of soil and depletion of groundwater is leading humanity directly over the cliff.”

All life needs water.  Water allows mineral nutrients in the soil to be absorbed by plants.  Your body is about 60 percent water.  In some regions, farms receive adequate water from precipitation.  Other regions require irrigation.  About 17 percent of cropland is irrigated, but it produces 40 percent of the world’s crops.

Some underground aquifers are unable to recharge as fast as pumps are extracting the water — like the vast Ogallala aquifer in the U.S. midlands.  They are unsustainable water mines.  Several communities in Colorado are (temporarily) drinking from reservoirs of 10,000 year old water.  Forty percent of humankind now lives in regions with chronic water shortages, especially Africans, with their rapidly growing populations.

When ancient aquifers are depleted, subsidence can occur — the ground sinks, filling the empty space where the water once was.  This makes it impossible for the aquifer to ever refill again.  In some portions of Mexico City, subsidence has lowered the ground surface up to 28 feet (8.5 m), causing much damage.  Irrigation can also lead to the accumulation of salt in the soil, which eventually creates a permanent wasteland.  In the cradle of civilization, the once thriving Tigris Euphrates floodplain is now “a glistening desert of salt.”

Earth resources have played a starring role in world history.  They enable the rise of civilizations, and their limited eras of prosperity.  It’s no coincidence that the Industrial Revolution began in Britain, because they had abundant deposits of coal, iron, and limestone in convenient locations.  The U.S. skyrocketed into a global superpower by exploiting huge deposits of a wide variety of Earth resources.  In World War II, Japan was short on iron, coal, and oil.  Hitler invaded southern Russia in an effort to seize the huge Baku oilfields.

In coming years, as fossil fuel fades out, agriculture will once again be muscle powered and low tech (if the climate crisis allows crop production to continue).  Industrial scale food processing and distribution will fizzle.  Potent synthetic fertilizers and other agrichemicals will no longer be available.  As harvests decline, population growth will shift into reverse.

Finally, a few footnotes.  GeoDestinies was written on a tiny digital typewriter that allowed files to be saved on a floppy disk.  As Walt typed, the display presented a single line of text.  He never owned a computer, and never had direct access to the internet or email.  He had no spare time.  Finishing this manuscript was job one.

I gave him prints of interesting online stuff, and copies of my book reviews, including Brian Fagan’s The Great Warming, and The Little Ice Age.  The Fagan reviews reinforced his belief that climate always changed.  Back in 2012, the notion that human-caused emissions were disrupting the climate was still controversial in the mainstream mindset.

In his 96 years, Walt witnessed remarkable changes in the American standard of living.  These were only possible because of our maniacal binge of energy guzzling.  Modernity’s high standard of living, and fabulous healthcare was awesome.  But the long term environmental impact of these short term benefits was huge.

He lacked some sympathy for environmentalists who opposed energy development projects in America, whilst they were enjoying a comfortable consumer lifestyle.  High impact projects were often diverted to poor nations that had few regulations, if any.  In 2012, Walt was not fully aware of the serious long term hazards of nuclear energy, and the lack of permanent storage for high level radioactive wastes.

Walt was especially horrified by exponential population growth.  In his lifetime, the human mob skyrocketed from 1.9 billion to 7.6 billion.  He was deeply disappointed that overpopulation was a taboo subject for secular and spiritual leaders.  Large numbers of immigrants to the U.S. came from cultures where large families are the norm.  Their dream was to live a maximum impact consumer lifestyle.

Walt completed the manuscript of the second edition in 2012.  Since then, he wrote four papers for the Negative Population Growth Forum.  Our Plundered Planet (2014), A Geomoment of Affluence (2015), The Scale of Things (2016), Framework of the Future (2016).

Posted by What Is Sustainable at 1:48 PM

Actually it's amazing how many items are made from oil, that's what's the real concern.
Nikola Tesla was a Serbian-American inventor, electrical engineer, mechanical engineer, and futurist best known for his contributions to the design of the modern alternating current electricity supply system,
I'm told or read that engineering is trying to reproduce his electronic energy field fron the magnetic earth. That he was trying to reproduce

Well protest songs and writing, from the 1960's to ??
bob dylan movie i'm not there

bob dylan movie i'm not there

Glen Beck radio announcer talking about everything green , the Dems want higher gas prices.
Well I've seen the house and rental in your area, if you want to try living off the grid in Arizona , let me know,

Thanks for the offer. Right now, I'm not thinking about moving south. Need to finish my book.

...with a money back guarantee!