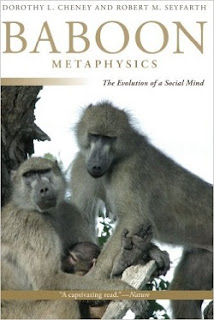 Baboons are a fascinating branch of the family tree.  We humans have big brains, complex language, and a staggering collection of tools.  Yet, with smaller brains, grunt communication, and no tools, baboons have brilliantly lived sustainably for millions of years — like every other species of animals, except you-know-who.

Long ago, primates began as cute insect eating tree critters.  Climate change has always been a mischievous rascal, periodically redefining the rules of survival.  Two to four million years ago, east Africa, the “cradle of humankind,” became cooler and dryer.  Rainforests shrank, and grasslands expanded.  Many forest species went extinct.  Chimps and bonobos were lucky.  They remained in the forest and managed to adapt to changing conditions.

Baboons are interesting because, like humans, their ancestors moved out of the forest and adapted to savannah-woodland ecosystems.  They have managed to survive in a rough neighborhood that includes lions, hyenas, leopards, cheetahs, crocodiles, and trigger happy farmers.  Baboons demonstrate that primates can survive in a dangerous habitat without spears, fire, complex language, or throbbing big brains — and they can do this without causing irreversible degradation.

Baboons evolved in a tropical ecosystem.  They don’t need protective clothing or shelters.  They have a year-round supply of food, so they don’t need to hibernate, or stash nutrients for lean seasons.  Their diet majors in plant foods, including palm nuts, jackal berries, figs, and sausage fruit.  They also consume animal foods like insects, rodents, fish, shellfish, hares, birds, vervet monkeys, antelopes, and human infants.

Anyway, my muse gave me a dope slap and told me to pay more attention to baboons, so I read Baboon Metaphysics, by Dorothy Cheney and Robert Seyfarth.  The authors have joined the animal intelligence crusade, and are working to discredit the common misconception that nonhuman animals are little more than mindless stimulus-response automatons.  Their research was performed by intruding into wild baboon communities and performing annoying experiments on them.

Modern humans have been lobotomized by their extreme disconnection from the living world.  If folks spent their days in continuous contact with wild animals, no research would be needed to certify their obvious intelligence.

Metaphysics is defined as “the part of philosophy that is about understanding existence and knowledge.”  This is much like intelligence, which is intellect, the faculty of understanding.  Cheney is a biologist, and Seyfarth is a psychologist.  Their objective is to persuade readers that nonhuman animals, like baboons, supplement their instincts with aspects of genuine intelligence.

My focus is ecological sustainability, and I see “animal intelligence” from a different perspective.  All wild nonhuman animals adapt to their ecosystem and go with the flow.  They have lived sustainably for millions of years.  What could possibly be more intelligent?  It doesn’t seem intelligent to knowingly destroy the ecosystem, and radically destabilize the climate, whilst stumbling around staring at glowing screen thingies.

Here are three reasons why there aren’t seven-point-something billion baboons in the world.  (1) They didn’t exterminate most of their predators.  (2) They made no effort to increase the volume of food produced in their habitat via soil mining; they adapted to the wild food supply provided by nature.  (3) They lived as evolution had prepared them to live, wisely avoiding the toxic tar baby of innovation and technology — the express lane to extinction.  Birds evolved to fly; baboons did not.

All nonhuman species live in accordance with these three principles, whilst the human population continues to grow explosively.  It is out of control because modern folks generally lack foresight, and the wisdom to practice mindful self-restraint.  They lack the intelligence to comprehend the ecological foolishness of relentless campaigns of predator extermination.  Naturally, living in vast crowds conjures a new class of predators — infectious diseases and degenerative diseases.

Meanwhile, baboons have no need for wisdom.  They enjoy the management services provided by Big Mama Nature.  Predators happily keep their groups stable.  In the great dance of life, we all feed one another.  The authors note, “Predation accounts for the vast majority of deaths among male, female, and juvenile baboons.”  Baboons do not spend the last years of their lives decaying; they feed the lions.

Baboons intelligently avoid predators by sleeping in trees, or at the top of steep cliffs.  In daylight hours, they return to the savannah to forage.  (YouTube has many fascinating baboon documentaries.)  Males are much larger than females, and when predators visit, it is their responsibility to rush in and be as loud and belligerent as possible.  Males have large canine teeth, and predators are careful to avoid being wounded; they prefer sneaky low-risk surprise attacks.  Males hold off predators whilst the females and young try to escape.  The lives of males are nasty, brutish, and short.  Females can live 20 years.

Powerful aggressive males encourage group survival.  The alpha male baboon is the primary sperm donor in each group.  His evolutionary mission is to father as many offspring as possible, but his time in office is usually brief.  A new alpha, on average, is master of the harem for just seven to eight months.  Consequently, he promptly tries to kill the offspring of all lactating females, so these mothers will be freed to produce offspring with his genes.  This infanticide custom provides a secondary control on population growth, and encourages the production of badass defender daddies.

Like many other species, baboon society is hierarchical.  There are many levels of rank in the group, and every individual knows his or her current position.  Among female baboons, ranking is fairly stable.  They spend their entire lives in the group of their birth.  Males, on the other hand, migrate to other groups as young adults.  The arriving young lads are a threat to the status of the current alpha.  Challenges usually involve macho posturing, loud shrieks, and high-speed chases — not injurious beatings.  An individual male’s rank can change frequently.

Paul Shepard once asserted that ground monkeys (like baboons) are “the most aggressively status-conscious creatures on Earth.”  I wonder if humans are even more so.  Baboons play the status game without rubbishing their ecosystem.  Modern humans devote their entire lives to hoarding manufactured status trinkets.  Countless landfills are piled deep with discarded trinkets, thrown out to make space for our newer, bigger, flashier, trendier foolishness.  We cannot wean ourselves from habitual car driving, because travelling intelligently would take a huge toll on our social status (sorry kids!).

We are not doomed by faulty genes.  We’re doomed by mindlessly marching to the beat of screwy beliefs, but belief is voluntary.  We do not have to shop till we drop.  Thinking outside the box is a sign of intelligence.  It’s OK to question consensus reality.  It’s OK to stand strong against the powerful currents of our insane culture.  It’s OK to leap over the fence and pursue a meaningful and rewarding life.  This may be the only life you ever live.  Live well!

Cheney, Dorothy L., and Robert M. Seyfarth, Baboon Metaphysics — The Evolution of the Social Mind, University of Chicago Press, Chicago, 2007.
﻿
﻿
Posted by What Is Sustainable at 2:10 PM

I understand intelligence as the ability to respond to a situation not yet seen by an individual. This ability is a must in a world where tomorrow can not be predicted. Of course, this ability may vary between individuals of a species and enormously between species, but it is a part of evolution.

Along the same line of thinking, I do not understand the 'scientific' view that we lack 'free will'. But then, a domesticated human may not have free will. His response in a given situation can always be predicted.

Hi Amarnath! I’m not a philosopher, I don’t like juggling abstractions. I’m not sure if baboons are geniuses, but I have great respect for the way they live in a low impact manner. I’m sad that we have such a hard time living in balance with nature.

Hi, Richard! Thank you for your regular insight into the behavior of our close relatives. It is interesting to see what similarities they have with us, and where they differ. One thing that particularly struck me about this writing was the hierarchy that exists among baboons. Of course I am aware of the Alpha concept, but I never really gave thought to other species having hierarchies and what implications that has for human attempts to live without hierarchy. I'm certainly not one for writing off destructive human behaviors as "natural," but perhaps some level of hierarchy is common throughout species and human attempts to live without leaders are futile. I've read a lot about groups that have no formal leaders in their organization. There are probably leaders in practice, but not in name. Anyways, just a thought!

Hi Matt! Chimps, gorillas, and many other social animals have hierarchies. When I think back to my grade school classmates, there was an informal hierarchy. Some were very bright, others not. Some were extroverts, others not. Some excelled at performing like ideal students, and others were bored by the numbing tedium of compulsory education. There was some sort of spectrum of ranks.

Anyway, in the classroom sense, I don’t think that social rank is unnatural. But in hierarchies of domination and submission, rank is different. This tendency seems common when large groups are having friction with surrounding groups — typically in cultures based on plant and/or animal domestication.

I think that forms of hierarchy were present in wild cultures, too, even those labelled egalitarian. Different individuals had different gifts and weaknesses. Where humans run into serious trouble is when social status is based on personal possessions — horses, gold, flocks, real estate, automobiles, etc. This has grown to obscene and catastrophic levels today.

Today, “patriarchy” is a four-letter word. I suspect that its roots are far deeper than civilization. A number of species have “sexual dimorphism,” in which males are bigger and stronger than females. I think this originated in the survival game — males attacking the predators whilst the females and young tried to escape.

On the Wikipedia Dominance Hierarchy page, they note: “Female-biased dominance occurs rarely in mammals, and it is observed consistently in hyenas, lemurs and the bonobo. It is also observed in elephants.”

Makes sense! Yes, watch your use of the bad word, patriarchy :-)! I was an ideal student, all the adults thought I was just swell.