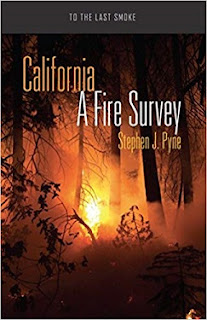 
Stephen Pyne is among the world’s foremost experts on fire, and the author of many books.  California: A Fire Survey presents a blazing discussion on how fire has perplexed and bedeviled the Golden State.  One of every nine Americans lives in California.  Thanks to the arrival of industrial civilization, 170 years of rapid growth, and a culture devoted to the hardcore pursuit of wealth and excess, the state’s ecosystems resemble the smashed up cars at the end of a demolition derby.


Throughout the colonization process, the newcomers were possessed with a burning desire for prosperity.  The madness shifted into high gear as the nation industrialized, and created the infrastructure for mowing down ancient forests, exterminating millions of buffalo, eliminating vast numbers of fish, and extracting valuable minerals with fanatical zeal.


When it reached the Pacific, the culture of furious greed collided with an unusually flammable ecosystem.  “An estimated 54 percent of California ecosystems are fire dependent, and most of the rest are fire adapted.”  The land has been burning for thousands of years, because of natural wildfire, and human caused burns.  This has displaced numerous fire intolerant species.  Under ideal conditions, once ignited, a California fire can burn and expand for weeks or months.  The potential for expansion depends on three things: fuel, terrain, and weather.  Of these, the availability of fuel is something that humans can influence.


There are two main types of fuel, forests (mostly in the north) and chaparral (mostly in the south).  Chaparral is grassland dotted with brush.  Much of its vegetation is flammable, and chamise is especially so.  Once it is older than 25 years, it burns with intensity, and then reseeds and resprouts.


“Malibu Canyon is to wildfire what the Red River is to flooding.”  Pyne called it a fire bellows.  It often provides an ideal combination of excellent fuel, fire friendly terrain, Santa Ana winds, and human foolishness.  It burns explosively.  Many celebrities have built mansions in the canyon, because it offers fantastic views of the ocean.  Malibu had major fires in 1956, 1993, 2003, 2007, and 2018.  While mansions come and go, taxpayer anger grows at spending millions of dollars on fire control to protect the property of the superrich.


The newcomers to America had a very different perspective.  In their minds, fire destroyed precious timber, sending enormous potential profits up in smoke — horror!  And so, the cult of aggressive fire suppression was born.  Fight fires like crazy, in every possible way, and send the huge bills to taxpayers.  The unintended consequence of this brilliant strategy was an enormous buildup of unburned fuel over time, which set the stage for major conflagrations.  Oops!


Southern fires arrive like Godzilla.  Northern fires arrive like a flash flood or blizzard — in late August 1987, lightning ignited 4,161 fires in Northern California, destroying 755,475 acres (305,729 ha) and 42 homes.  Firefighters worked furiously to extinguish every ignition, but some escaped and spread out of control.  By and by, a few wise guys began reconsidering their self-defeating strategy, and contemplated using regular prescriptive burns to control fuel buildup.  After many decades of fire suppression, the forests had become severely clogged with fuel.  Mechanically removing fuel buildup from vast areas of forest is a huge and enormously expensive project.


Southern California fires were violent, frequent, and unavoidable.  In addition to forests and chaparral, a new major source of fuel was growing — suburbs.  Wildfires happily reduced wooden structures to ashes.  So, the wise guys created fuel breaks — strips of vegetation 100 feet (30 m) wide were cleared to separate the McMansions from the chaparral.  This often worked to stop the spread of flames, but not airborne sparks.  Regularly maintaining fuel breaks was expensive, and taxpayers bleated about the cost of prevention.


As the sprawl monster expanded, there was less and less space for fuel breaks in new developments, at which point fuel reduction implied suburb reduction, an unpopular idea.  Many, many suburbanites, for decades, with astonishing ignorance, stubbornly resisted replacing their extremely flammable wood shingled roofs with fire resistant material.  A number of local governments did not ban development in fire prone locations where the landscape was a wind tunnel.


Reducing the fuel load via prescribed burns was possible, in theory, but fire creates smoke, and smoke annoys suburbanites, especially the palace dwelling celebrities.  Smoke does not readily blow out of the bowl-like Los Angeles Basin, home to 17 million.  By 1947, the air in L.A. County was so filthy that the herd got uppity.  Numerous regulations were created, but the wildfires laughed at them.  So, the only remaining option was expensive and intensive fire suppression.


In 1849, when the Gold Rush began, a city of canvas tents suddenly appeared along San Francisco Bay.  By 1906, it had rapidly grown into a major city, in which 90 percent of the structures were still wood framed.  As many other U.S. cities had already discovered, this was a recipe for catastrophic fire.  Plus, the city was unluckily nestled close to the San Andreas Fault and the Hayward Fault.


On April 18, 1906, an earthquake sent waves across the land surface, ripping apart streets, water mains, and gas pipes.  Numerous fires soon appeared and quickly spread.  Hot air rose so fast that it sucked more heat upward, creating a chimney through the atmosphere.  Four days later, 28,188 structures had gone up in smoke, and 2,000 to 3,000 people perished.  On the outskirts of the city, only a fringe of houses remained standing.


Many homeless refugees fled across the bay to Oakland, and many stayed there.  Prior to settlement, about 2 percent of the Oakland region was woods.  As the city grew, grassland fires above the town burned often and harmlessly.  But a new gold rush was emerging — real estate development.  Suburbs were expanding up the hillsides.  Wealthy elites built their mansions where the views were stunning.


Rapid growth in the bay region increased the demand for lumber, which accelerated deforestation elsewhere.  A super ambitious developer in the Oakland story was Frank Havens.  One of his schemes was to plant fast growing eucalyptus trees from Australia, and make megabucks selling lumber and firewood.  Too late, he tearfully learned that his trees were worthless until they were 75 to 100 years old.  He discovered this after he had planted up to eight million trees along a 14 mile (22 km) strip from Berkeley to Oakland.  These trees drop lots of highly flammable bark strips as they grow, and when hard frosts kill the trees, they dump loads of highly flammable leaves.


By and by, the East Bay hills became the Malibu of the north.  Seasonal Diablo winds frequently howled in from the east, rushing through the dangerous fuel buildup.  A 1923 inferno burned 584 homes.  This was followed by fires in 1946, 1970, 1980, and finally, the Tunnel Fire of October 1991.  That year, a frost had killed eucalyptus trees, boosting the fuel load.  A record heat wave followed a summer of drought.  Many homes in Oakland were jammed close together, and many had wooden roof shingles.


The Oakland Hills firestorm began as a grassfire, which then exploded as winds gusted up to 65 miles per hour (100 km/h).  Power lines got zapped, disabling 17 water pumping stations.  Oakland had nonstandard fire hydrants, which could not be used by assisting fire departments.  In just one hour, 790 structures were destroyed.  Eventually, 3,354 houses, and 456 apartments and condos burned.


And so, dear reader, I wonder if treating an ecosystem like a treasure chest, and looting it as fast as possible, with complete disregard for future generations, using all the latest gizmos invented by mad scientists — “progress” — is truly a healthy path.  I wonder why our schools are still preparing youngsters for a life of mindless hardcore looting.  That seems a bit odd.  It isn’t even fun.


One thing missing in the book is the Big History perspective.  Fire was domesticated in Mother Africa, and the hot idea eventually spread everywhere.  Siberian hunters originally brought fire-making knowledge into the Americas.  What was California like when they arrived?  Did thousands of years of Indian burning displace fire intolerant species, and actually create a fire prone ecosystem?


Bill Gammage described the scale of Aboriginal burning in Australia.  Most of the continent was burnt about every 1 to 5 years.  Just 40 years after the British colonists banned burning, the site of a tidy dairy farm could be replaced by dense rainforest.  This suggests that the hunter-gatherers radically altered the ecosystem.  In another book, Fire: A Brief History, Pyne described how domesticated fire altered many ecosystems.


There are several Pyne videos on YouTube, running from 15 minutes to an hour.  He is articulate and well informed.  Many of his fire books are available on Amazon.
Posted by What Is Sustainable at 1:04 PM

Most of Australia's ecosystems are adapted to fire. There are however a few exceptions. Tasmania's west coast is one such place. An ancient Ghondwanian relic that supports species found nowhere else on earth. Huon pine is perhaps the most well known but there is a diversity of other lowland and alpine plant species and many of them have zero tolerance to fire. The warming climate is driving weather systems further south making Tasmania's west coast experience drier summers more frequently. Drier summers brings increased risk of fires to an ecosystem that simply cannot tolerate regular burning. One has to wonder whether a world that is 2 degrees warmer will still contain the iconic Huon pine.

Hi! Yes, I understand that much Australian flora is fire tolerant or fire dependent. I sometimes wonder if that was true when the first bunch of fire makers appeared on the shore. Did 30 or 50 thousand years of burning radically redesign the ecosystem? We may never know. It’s definitely way too late to undo the changes.

I have a copy of "A field guide to the mammals of Australia" by peter menkhorst. I often peruse it of an evening and always come away with a sense of wonder, fascination and sadness. Australia had lost so much of its unique wildlife.
The book contains all extinct and living mammals known to have lived in Australia including introduced mammals.

One thing that struck me the other day was that the book left out one notable species. Us. Humans have been in Australia for an awfully long time. Some scientist even think that 60000 years isn't out of the question. At what point does an animal cease to be an exotic and become native?
Are Aborigines/humans native to Australia? I guess it's largely academic but I find it interesting never the less.
While our hunter gather predecessors may or may not be "native", Australia's current occupants certainly are not.

FEMA produced a report on the 1991 Oakland Hills Firestorm. The last 28 pages are large photos of before and after images. The immense fuel loads in the before images are stunning. The link below is to a PDF of the report. Most photos are sideways. Select the View menu >> Rotate View >> Clockwise.

Hi Anonymous! When do a people become native? From the Big History perspective, you could say that we’re all Africans. From a common sense perspective, the Aboriginal people are native. I suspect that Menkhorst was a paleface.

Listening to the radio last night, Reveal did an excellent show on the Santa Rosa fire, a play-by-play description of the disaster, including lots of commentary from the victims. It reveals how flammable California is, and how clumsy the responses can be. Listen to it HERE