The Rise of Homo Sapiens 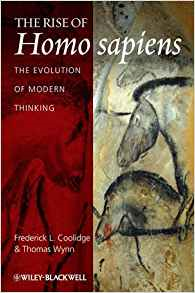 
The Rise of Homo Sapiens, by Frederick Coolidge (psychologist) and Thomas Wynn (anthropologist), is a book about the evolution of human cognition.  It describes the seven million year voyage that resulted in the magnificent mind that’s throbbing between your ears right now.  This voyage began with the first hominins — bipedal (two legged) apes who were either our direct ancestors, or our long lost cousins.


Note that the details of human evolution are the cause of endless barroom brawls among rowdy paleoanthropologists and archaeologists.  They constantly argue about the members of our family tree, the transitions between one species and the next, and the dates when changes happened.  To keep it simple here, the first brainy hominin was Homo erectus, who arrived on the African stage 1.8 million years ago.  Erectus probably evolved into Homo heidelbergensis, who was maybe the common ancestor of both Homo neanderthalensis and Homo sapiens (our hero!).  Neanderthals are our cousins, not our direct ancestors (we share at least 99.5 percent of our DNA).


The authors believe that there were two significant surges in cognition, (1) Homo erectus 1.5 million years ago, and (2) Homo sapiens 40,000 years ago.  Erectus had a large brain, knapped stone tools, and was the first to move beyond woodland habitats.  They were able to survive in everything from dry savannahs to tropical rainforests.  From Africa, they spread to southern Europe and much of Asia.  Around 1.5 million years ago, they invented a major advance in stone tools — biface knapping.  These were hand axes and cleavers that had two cutting edges.  For the first time, folks could now effectively butcher large animals — an ability that greatly expanded their food resources.


Razor sharp stone tools were revolutionary.  Great apes, monkeys, and other mammals can only cut and chop with their teeth.  This book made me appreciate, for the first time, the huge importance of stone tools.  Cutting is big juju!  Imagine a world in which teeth were the only cutting edges for any purpose.  Civilization would be impossible, and you and I would be naked wild things on a sunny African savannah.


Another revolutionary technological discovery was the domestication of fire, which kicked open the gate to life as we know it.  The earliest evidence of fire was found in an African cave, dating to 1.4 million years ago.  Erectus was probably a fire user.  Prior to manufactured tools and domesticated fire, our ancestors were still ordinary animals, like baboons — wild, free, and happy.  These two changes shoved them outside the community of all other animals, and put them on an ominous new path.


In the million years following the invention of biface cutters, Homo erectus artifacts reveal no evidence of further innovation.  Maybe they now had everything they needed, and life was grand.  But the book’s authors live in a culture that is constantly disrupted by hurricanes of innovation.  To them, a million years of stability and sustainability is glaring evidence of feeblemindedness.


Both authors are shameless out-of-the-closet human supremacists, and their book is a flag-waving celebration of human brilliance.  They write, “Homo sapiens has transformed the natural world into one of culture and civilization that our distant ancestors, let alone members of other species, possibly could not imagine.”  No kidding!


The authors are also masters at the mysterious art of academic writing.  Behold: “The allometric trajectory that best distinguished anatomically modern Homo sapiens and Neanderthals was a tendency towards klinorhynchy or globularity in modern humans.”  The book was not a pleasure read for a general reader like me.  I was not the intended audience.


In the book, hominins are essentially presented as being biological machines.  Much attention is devoted to brain size, brain components, brain processes, and genetic evolution.  Subjects include decision making, planning, memory, learning, abstract thinking, language, communication.  Bones and artifacts reveal little or nothing about stuff like thinking, memory, or speaking, so the book indulges in a lot of speculating, which could get quite frisky, sometimes hopping over the fence of credibility.


Homo sapiens maybe emerged around 200,000 years ago.  Somewhere around 30,000 to 40,000 years ago, there is evidence of a significant shift that is often referred to as the Great Leap Forward.  It was an era of breathtaking cave paintings, decorative ornaments, ceramics, carvings, and innovation in hunting technology.  The authors make the highly controversial assertion that this big shift “developed because of an additive genetic mutation or epigenetic event that affected the neural organization of the brain.”  And so, a new and turbulent chapter in the human saga was the result of random genetic juju that scrambled our thinkers.


Far less attention is devoted to significant factors that were external to the brain machines and their magic genes.  By the time of the Great Leap, folks had struggled to overcome a number of major challenges.  They had figured out how to survive in a chilly temperate climate — warm clothing, secure shelters, food storage.  Utilizing the latest state of the art technology, they had become highly skilled at team hunting.  They lived in regions having abundant game.  People who are struggling to survive are not going to have time to fool around with nonessential amusements.  But people living in times of prosperity, like the Baby Boomers, or the cave painters, can indulge in fanciful excesses and extravagances.


In the Great Leap era, the world was unimaginably alive and a spectacular, breathtaking miracle.  Modern folks would eagerly pay big money, and get on a 40-year waiting list to experience a pure, thriving wilderness filled with mammoths, lions, aurochs, and buffalo.  To gasp with wonder at vast clouds of birds filling the skies with beautiful music and motion.  To listen to rivers thrashing with countless salmon.  To see, hear, and feel the powerful vitality of the reality in which our species evolved, the type of world that the genes of every newborn baby expects to inhabit — a healthy, sane, beautiful, wild paradise.


Craig Dilworth wrote that the cave painting tribes were the luckiest humans of all, because they lived at the zenith of the entire human experience.  A number of revolutionary innovations had provided them with a temporary opportunity to experience a magnificent way of life.  But the road ahead was a rough one.  Another ice age was approaching, and Europe would get colder than it had been in 100,000 years.  Large game would become less abundant due to habitat change, and to the long-term consequences of, century after century, killing a few too many big critters that did not breed like bunnies.


Humans have retained some characteristics of ordinary animals — our minds are focused on the here and now, our capacity for acute foresight is flaccid, and we often become prisoners of habitual thoughts and behaviors.  Over time, human numbers grew, and food resources diminished.  Storms of devastating cleverness eventually led to the domestication of plants and animals, a transition that many anthropologists refer to as the Great Leap Backward.


And now, dear reader, here we are, standing in the growing shadow of an era of climate change helter-skelter, a painful withdrawal from a total addiction to energy guzzling, and the eventual obliteration of life as we know it.  And, here we are talking about a book that celebrates the miracle of human cognition.  Oy!


A year ago, I spent a few hours with this book, and set it aside.  Recently, I looked at it again, because I was interested in some anthropological information.  I contemplated reviewing it, but decided not to.  Then, my muse gave me a dope slap (SMACK!).  The book is perfect!  It’s a haunting mug shot of the mindset that is engaged in a full-scale war against all life — yet refuses to notice it, or care.


This is the mindset in which educated brains are thoroughly marinated from childhood onward.  Like standing in front of a curvy funhouse mirror, the distorted reflection we see is Superman or Superwoman, powerful beings of greatness and goodness.  Thus, the notion of superheroes knowingly engaging in pathological mass destruction is perfectly ridiculous.  We much prefer the flattering portrait to the lost and confused critter behind the mask.  This may not be the path to a happy ending.


One passage noted that, “excepting humans,” today’s great apes are in decline (chimps, bonobos, gorillas, orangutans).  Could their big brains have doomed them?  “Large brains are expensive and have profound life-history consequences.  If they no longer yield a competitive edge, their owners will, predictably, go extinct.”  Do you think that humans truly are the exception?  Is our ever-growing cleverness rotting out our competitive edge, as it undermines the ecosystems that make our existence possible?  Will our superhero brains ever snap out of their trance, open their eyes, and become fully present in reality?  Stay tuned.  And now, a message from our sponsor…


Coolidge, Frederick L., and Thomas Wynn, The Rise of Homo Sapiens: The Evolution of Modern Thinking, Wiley-Blackwell, Chichester, U.K., 2009.
Posted by What Is Sustainable at 1:22 PM

Human beings deny reality. It is an inherited condition that all humans have and enabled homo sapiens to overcome our fear of death when we became fully self aware. Reality denial and full self awareness came about by way of a simultaneous mutation in an individual thousands of years ago. It is these two traits combined that enabled the great leap forward. It is why we were able to outcompete other hominids. It's why we're the smartest species on the planet and yet totally insane at the same time. Coming across Varki and Brower's theory on denial has enabled me to see the world through a whole new lens.

I'm not sure if the authors of The rise of homo sapiens discussed reality denial but if they didn't I think they would be missing a vital ingredient in the evolution of human cognition.

No, the authors did not discuss reality denial. We are the greatest! Actually, the whole book was about reality denial, without saying so. We have no serious defects.