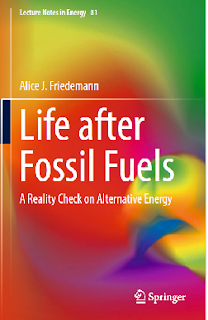 In 2020, Jeff Gibbs’ documentary Planet of the Humans fell out of the sky.  It aimed a spotlight on the many ways in which solar and wind power were neither green nor renewable — no free pony.  In response, many “green” activists explosively soiled their britches and demanded that the film be banned.  Millions watched it.  Similarly, in 2021, Derrick Jensen and team published Bright Green Lies, which was soon followed by a documentary based on the book.

These two projects were righteous fire-breathing exposés of the deceptions regularly made by folks promoting “green” technologies.  Passionate preaching can often get some folks to listen.  Sometimes it inspires minds to change.  Other folks prefer to have deeper understanding before revising their views.  Alice Friedemann’s book, Life After Fossil Fuels, will appeal to them.

Without rage and condemnation, she calmly and carefully described why she thinks we would be wise to end our addiction to fossil fuels as soon as possible.  She evaluated the alternatives, and concluded that most are not free ponies.  Importantly, she carefully explained the benefits, limits, and faults of the various options, and meticulously cited the sources of her information — literally hundreds of them.

Readers are introduced to the notion that alternative energy is not the magic key to a sustainable utopian wonderland.  The status quo is a high speed, ridiculously luxurious, one-way path into dark and treacherous realms.  We’ve been living like scruffy back alley gods on drugs.  The good news here is that no “green” solution can permanently keep the massively destructive status quo on life support — it’s going to end up where it’s headed.  “We are nearing the end of a one-time binge.”  Indeed!

So, my eyes began tap-dancing across page 1, and I was soon scrolling through a thrilling 86-page joyride.  Friedemann presented an informative and embarrassing birds-and-bees discussion of the horrific unintended consequences of our childlike obsession with living like crazy dysfunctional grownups.  I cheered with excitement with each new chapter.  It was so refreshing to experience such a sumptuous feast of clear and coherent bullshit free information.

Readers are introduced to the important notion of EROI (energy returned on energy invested).  Each year it’s taking more and more energy to find, extract, process, and distribute fossil energy.  Imagine having a job that paid $100 per day, but the bridge toll for getting to work was $99.  For this reason, enormous amounts of fossil energy will remain in the ground forever, thank goodness!  About 65 percent of buried oil is technically or economically unrecoverable.

The fracking industry is drilling like crazy, while more and more unlucky tycoons land with a splat in the tar pits of bankruptcy.  The richest discoveries were drilled and drained first.  “Globally, new oil discoveries have fallen for 6 years, with consumption of oil six times greater than discoveries from 2013 through 2019.”  Trouble ahead.

In manufacturing, would it be possible to eliminate fossil energy by switching to wood-based fuel?  Take a wild guess.  Can we continue producing mountains of food when energy-guzzling synthetic fertilizers have become fond memories of the good old days?  Can industrial agriculture continue when energy-guzzling farm equipment runs out of affordable fossil energy to guzzle?  Will high speed horse carts haul fresh California veggies to Minnesota?

Can industrial civilization exist without energy-guzzling fleets of ships, planes, trains, and trucks?  “In the U.S., trucks deliver 80% of goods over 4.1 million miles of roads, with 80% of towns completely dependent on trucks.”  Can transportation systems shift to electric power?  “A truck with a driving range of 600 miles needs a battery pack weighing 35,275 pounds and can carry just 10,000 pounds.”  Oh, and cold weather reduces driving range by 35%.

“All contraptions that produce electricity need high heat in their construction.  They all need cement made at 2600°F.”  There is no known way to make concrete with electricity.  Making steel for wind turbines requires 3100°F (1700°C).  “Solar panels require 2700° to 3600°F (1500° to 2000°C) of heat to transform silicon dioxide into metallurgical grade silicon.”  Nuke plants still on the drawing board, in theory, might be able to generate 1562°F (850°C), but this is not hot enough for making cement, steel, glass, and lots of other stuff.

Friedemann’s key question is: could life as we know it continue in an alternative energy future?  By chapter 13, all contestants for powering a happy sustainable future were rejected, except one — biomass.  Prior to the fossil fuel era, heavy industry was powered by charcoal made from dead trees.  Brazil is still making steel with rainforest charcoal.

Yikes!  This spooky paragraph sent a cold chill through my body.  Weird chapters followed.  I began to wonder if I had just wasted two entire days of the only life I may ever live.  But, by this point, I was aware that Friedemann had a whimsical side, so I kept reading, hoping for a sharp turn.  It came later.  Act two of the book was focused on contemplating how we could produce enough biomass to power industrial civilization, and prepare to feed the 3 billion additional folks expected for dinner in 2050.  Hope fiends will have a good cry.

Bummers obstructing the rise of a biomass utopia include climate change, freshwater scarcity, brutalized topsoil, and our addiction to countless fossil powered processes.  Turning biomass into a liquid fuel known as ethanol is idiotic.  Trucks can’t guzzle it, and it refuses to be pumped through pipelines.  It takes about as much energy to make a gallon as the finished gallon contains.  (Ethanol is a monster child fathered by gold plated government subsidies to Big Ag.)

The bummer parade is long and unusual.  Make biodiesel with algae?  Make ethanol with seaweed, sorghum, or corn stalks?  Biodiesel could indeed replace oil-based diesel, if we were able to produce it in high volume.  This would require enormous amounts of cropland, and it would pummel the land as much as other types of agriculture.  If climate shifts blindside farm country, game over.

Bottom line: “The electric grid can not stay up without natural gas due to a lack of energy storage.  Transportation, agriculture, and manufacturing can not be electrified.  If transportation can not be electrified or run on Something Else, civilization as we know it ends.  Agriculture goes back to horses and human labor.”  When readers finally reach chapter 33 and slither across the finish line, their brains have been reduced to a bucketful of steaming glop.  It doesn’t look like we’re on the Yellow Brick Road to the Emerald City.  The sky is full of flying monkeys.  What a book!

The pisser here is that this very important book is sold by a textbook publisher, and it’s very expensive.  It won’t be able to catch much of a ride on the wave of interest generated by Gibbs, Jensen, and others.  Its modest collegiate audience is mostly the well-dressed offspring of the idle rich, and desperate students who are massively in debt.  Non-billionaires may need to rob a gas station, or get a library card.

The bigger pisser is that 12 year olds don't already know this stuff.  Maybe it would be polite to inform youngsters about the challenging future they have inherited.  I hope that Friedemann is busy working on something like a Dick and Jane primer for school kids — an affordable, competent, un-redacted, easy to read, mind-expanding introduction to actual reality, warts and all.  Imagine that.

NOTE TO ALL: Alice Friedemann has made THIS ENTIRE BOOK AVAILABLE ONLINE FOR FREE on her website:
https://energyskeptic.com

Posted by What Is Sustainable at 9:24 PM

Yes! The calm, steady, well informed discussion was great. It’s not necessary to jump up on the table and scream.

Just recorded the AUDIO of this review, Rick. Excellent!
https://soundcloud.com/michael-dowd-grace-limits/life-after-fossil-fuels-alice-friedemann-review-by-richard-adrian-reese

From what I can tell, the free contents of the book are scattered blog posts written over time. So, read the whole collection, and you'll learn more than what this book contains.

Sorry for the late response. I thought I OK’d it. (I responded to the first comment, but not the duplicate)

Alice recently posted a link to a new paper by Megan K. Seibert and William E. Rees, which also spanks the Green New Deal. Rees is a well-respected Canadian ecologist.

Through the Eye of a Needle

Friedemann’s post got criticism from one lad. She responded:

You should read my book "Life After Fossil Fuels". The fossil fuel companies have NOTHING TO DO WITH IT. Transportation depends on petroleum. Manufacturing depends on fossil fuels. Fertilizer is made out of natural gas and keeps 4+ billion of us alive. Half a million products (plastic, paint, umbrellas...) are made out of petroleum. We are ALIVE because of petroleum. There are no electric or hydrogen or other energy sources to replace fossil fuels in manufacturing. There are no alternatives to diesel for heavy duty transport. And we are out of time. World oil peaked in 2018. No time to invent or build renewables. If the idea is for as large a dieoff as possible, the deep ecology solution to human destruction of the ecosphere, then the Green New Deal is the way to go though. The best solution for the planet because the most people will die...