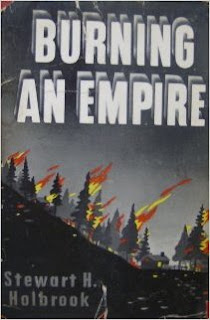 Long, long ago, around 1910, writer Stewart Holbrook met John Cameron, an old logger who had many stories to tell.  Cameron had witnessed the great fire at Peshtigo, Wisconsin (map) which began on October 8, 1871.  The town was a booming metropolis of 2,000 souls on the banks of the mighty Peshtigo River, and a hub for enterprises related to forest mining and wood products.


There had been little snow the previous winter, and just one rain between May and September.  Streams were shallow, and swamps were drying up.  Logging operations left large amounts of slash in the woods (piles of discarded limbs and branches).  Slash piles were eliminated by burning, even when it was very hot, dry, windy, and stupid.  Sparks and cinders would float off the huge bonfires onto a tinder dry landscape, where they frequently ignited other fires.  At Peshtigo, there had been small forest fires in the area during the preceding weeks, but these were commonplace, nobody worried.


The morning of October 8 was hotter than anyone could remember, and the air was deadly still.  At noon, the sun disappeared.  By nightfall the horizon was red, and smoke was in the air, making their eyes run.  At 9 P.M., Cameron heard an unusual roaring sound.  The night sky was getting lighter by the minute.  A hurricane force wind howled through.  Suddenly, swirling slabs of flames were hurtling out of nowhere and hitting the dry sawdust streets.


In a flash, Peshtigo was blazing — maybe five minutes.  The firestorm roared like Niagara Falls.  It was a seething, searing hell.  Forty people sought shelter in a (wooden) company boarding house, where they were promptly incinerated.  Others ran to the bridge, where they met a mob fleeing from the other side, as the bridge burst into flames.


Holbrook wrote that Cameron and others “saw things they never forgot.  Never.  They saw horses and cattle, yes, and men and women, stagger a brief moment over the smoking sawdust streets, then go down to burn brightly like so many flares of pitch-pine.  Forty years afterward, [Cameron’s] voice choked as he told of watching pretty Helga Rockstad as she ran down a blazing sidewalk, her blond hair streaming, and of seeing the long blond hair leap into flame that stopped Helga in her tracks.  Looking at the spot the next morning, he found two nickel garter buckles and a little mound of white-gray ash.”


The river was the safest place that night.  People kept their heads underwater as much as possible, so the great sheets of flame wouldn’t set their heads on fire.  Flaming logs floated down the river into the crowd.  Within an hour, the town was vaporized.  Big lumberjacks were reduced to streaks of ash, enough to fill a thimble.  At least 1,150 died, and 1,280,000 acres (518,000 ha) went up in smoke.


This is a condensed version of how Holbrook described the Peshtigo firestorm in his book, Burning an Empire.  In 1942, Holbrook met an old man who had lived in Peshtigo in 1871.  Before the fire, enormous pines grew close to the tracks between the town and the harbor.  But now there was nothing along the tracks except some brush and reeds.  The fire had erased the ancient forest, and the subsequent fires had destroyed the soil.


Holbrook’s book is a collection of stories describing the great forest fires of North America, from the Miramichi River valley in New Brunswick, Canada in 1825, to the Bandon, Oregon fire of 1936.  Readers learn about other big fires in Minnesota, Wisconsin, Michigan, Oregon, Idaho, and Montana.


The Peshtigo fire gets little attention in our history, because October 8, 1871 was also the date that Mrs. O’Leary’s cow knocked over a lantern, igniting the great fire of Chicago, a city made of wood.  Five times more people died in the Peshtigo fire, but Chicago was a major U.S. town.  Its fire destroyed more than 17,000 structures.  Also on October 8, 1871, numerous big fires raged across the state of Michigan, where it had not rained in two months.  These fires destroyed 2.5 million acres (1 million ha) — three times more timberland than Peshtigo.


Nobody knows how the Peshtigo fire started.  The sparks that ignited the firestorm may have come from twenty different fires.  While loggers were often blamed for triggering infernos, settlers were equally careless, and lit far more fires.  The Homestead Act provided land to anyone who would clear it and build a shack.  The quick and easy way for a settler to clear the trees was to start a fire.  Billions of feet of timber were simply burned.


The granddaddy of ecology was George Perkins Marsh.  In his 1864 masterpiece, Man and Nature*, he described how forests kept the land cooler in summer and warmer in winter.  Forests absorbed and conserved moisture.  When they were cleared, springs dried up, water tables fell, and rivers became more shallow and narrow.  Today, the Amazon Basin is painfully discovering the link between deforestation and severe drought.


Holbrook was an outstanding storyteller, a joy to read.  But he was the son of a logger, and he worked as a logger when young.  He witnessed the great fire at Tillamook, Oregon in 1933, and he later oversaw fire prevention efforts in the state of Washington.  I doubt he read Marsh.  Holbrook noted that during the logging binge in Minnesota, water tables dropped, and lake levels were up to eight feet lower.  He thought that this was the result of excessive swamp draining.


He didn’t understand that deforestation and drought are directly related.  He blamed the great fires on human carelessness.  Between 1933 and 1937, fires burned an average of 36 million acres (14m ha) each year in the U.S., and only eight percent were caused by lightning.  Today, progress, carelessness, and arson continue to be, by far, the primary cause of fires.


Holbrook was a proud American.  He admired growth and prosperity.  The timber industry was cool, except for its fire booboos.  He didn’t think like an environmental historian, who would perceive deforestation itself to be an act of carelessness.  He wrote, “Cutting a forest does not destroy it.”  Twenty-first century ecologists would never say that, because forests are far more complex than just a bunch of trees.  Nor would they endorse aggressive fire suppression, as Holbrook did.


Importantly, Holbrook reminds us about what life was like in simpler times.  At Peshtigo, there was no railroad line to the outer world, only a six-mile track from town to the harbor.  Prior to the fire, the telegraph line to the outer world had been cut by an earlier fire.  They had no radio, telephones, or internet.  They had no automobiles, fire engines, or water bomber airplanes.


In the coming decades, as we move beyond the cheap energy bubble, the world is going to return to a similar state of simplicity, one way or another.  At the same time, climate change and foolishness are going to weaken or eliminate many of the forests alive today.  We live in interesting times.  Be careful with matches!


*George Perkins Marsh’s book, Man and Nature, is a free download away.  A scanned version (huge file) can be downloaded from here.  Amazon offers a free Kindle download (tiny file) of the 1874 edition, The Earth as Modified by Human Action, here.  Free software for reading Kindle books on your computer, tablet or phone can be downloaded (click the link below the book cover).
Posted by What Is Sustainable at 1:49 PM

It is amazing!! The times of the early settlers was certainly not romantic. Here in old Europe there are still movies made about how romantic it was to go for the "New Worlds".

Just recently a movie was made about a German village in 1850 which suffered from three year of bad harvests (among other causes was snow in July destroying wheat fields).

The homeland act (mentioned in the article) reminds me that greed was given total permission. Burn down forests to claim the land... well, the same happened in Brazil, Australia, New Zealand and other "new worlds". European settlers were given land which was untouched rainforest. They spend their whole life (most likely the lifes of several generations) to "cultivate" the land.

In general, a society giving permission for uncontrolled greed and desire, such as burning down forests is the pinnacle of carelessness.
Well, that is what was and is happening. It is good to know it so that we will not be surprised as of what the consequence will be :)

Hi Georg! My belief in pathological greed is softening as I get older. More and more, I’m seeing that the Mother of Our Disasters is largely simple old-fashioned ignorance. Those pioneers could not foresee the future. They knew little or nothing about ecology. They were simply living as they had been taught to live. In those days, the frontier resources (timber, iron ore, copper, fish, etc.) appeared to be limitless. It would be impossible to deplete them in a thousand years. Their efforts were harmless.

John, you're most welcome. I hope there are no firestorms in your neighborhood today.

Regarding your shifting of blame from pathological greed to ignorance (a corollary of Hanlon's Razor, perhaps?), how does that dovetail with the ongoing rapid increase in willful ignorance, where the correct information is readily available, but dismissed as fake, conspiratorial, etc. by tens of millions of people?

I think that the farmers and lumberjacks who created ideal conditions for the fires that Holbrook described were far more ignorant and/or careless than greedy. This summer, there was a huge fire in Oregon’s Columbia Gorge, started by a teen fooling around with fireworks in a bone dry forest on a windy day.

Certainly the captains of industrial forest mining are driven by greed, and they are not ignorant. A few years ago, there were floods near Eureka, California, and the corporate spokesmen denied that recent clear-cuts upstream had anything to do with it. We live in an age of intense bullshit. It is standard procedure to deny responsibility.