The Origin of Science 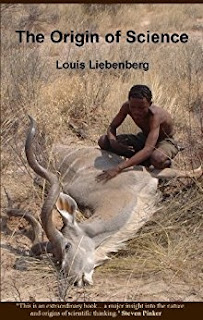 
NOTE: To better understand the following, you might read my review of The Art of Tracking first.


Back in the 1800s, folks on the cutting edge of Western science were perplexed.  Evolution had apparently provided hunter-gatherers with essentially the same brains that we moderns have, yet they appeared to be severely retarded — no clear-cuts, mines, cities, insane asylums.  What was wrong with them?  This abnormality led Alfred Wallace to wonder if the theory of evolution was a hoax.


At the time, he and his peers believed that science originated in ancient Greece, but none of them knew anything about the wild people of the Kalahari Desert in Botswana.  Around 1950, anthropologists began spending time with these hunter-gatherers.  Their studies noted that the hunters carried small bows, which shot poison-tipped arrows.  Poisons were made from plants, snakes, scorpions, spiders, or beetle larvae.  They took from 6 hours to 3 days to kill the animal.  Because anthropologists could see the bows and arrows, they asked questions about them.


What they could not see was enormous — a two million year tradition, a primary reason why humans walk upright, the mother of our high-powered brains — persistence hunting.  The researchers were attuned to cozy civilized living, not running barefoot across a thorny scorching hot desert for hours at a time.  Consequently, they missed a great deal.


Persistence hunting involved doggedly chasing game for hours until the animal collapsed from heat stroke and died.  Prey could run faster than hunters, for a while, until they became exhausted, overheated, and collapsed.  Their speedy escape left tracks that the less speedy hunters could follow.  Some hunters had fantastic skills in the art of tracking.  HERE is a 7-minute BBC video of a persistence hunt.


Louis Liebenberg is a South African lad, a “citizen scientist,” not a highly paid professional scientist from a luxurious education factory.  He has spent many years learning from the trackers of the Kalahari.  Because skilled trackers utilize an impressive variety of reasoning processes, he believes that tracking could have been the birth of science.  His first book, The Art of Tracking, was published in 1990.  It provides readers with an amazing collection of ideas.  The following commentary is on his 2013 book, The Origin of Science, which focuses on the relationship between tracking and science history.


Tracking requires accumulating an immense amount of knowledge about animal behavior and their spoor (tracks and other signs), an endless lifelong learning process.  In addition, while jogging across the desert in extreme heat, trackers must rapidly process complex inputs into accurate hypotheses.  The most gifted trackers excel at remembering, attention, reasoning, intuition, and imagination.  Their ancient culture enables them to survive in a vast desert that would promptly doom suburban consumers.


These wild super-survivors are nearly naked, unschooled, illiterate, unemployed, uninsured, homeless, penniless heathens who rarely take a bath.  Yet their culture remained sustainable for 100,000 years or more.  Their way of life is possible because they know how to engage in high quality scientific reasoning.  Tracking is about creative problem solving.  All trackers use inductive-deductive reasoning — track and sign recognition.  Advanced trackers also use hypothetico-deductive reasoning — track and sign interpretation, which requires more creativity.  Modern science continues to depend on both types of reasoning today.


Liebenberg has had years of direct experience with both wild people and modern people.  Tracking encourages wild people to develop heightened abilities for intuitive thinking, because the tracks of their prey are rarely clear and complete.  Intuition helps to fill in the blanks and suggest possible conclusions.  It is fast, automatic, effortless, and often unconscious.  Intuition also enhances social relationships.  Wild people are far more sensitive to each other than are folks in the modern world, “where perceptions of others have been blunted by fragmented and shallow relationships.”


For Liebenberg, “education” is a four-letter word, because it is so authoritarian.  Inmates are forced to sit indoors, in rows of hard seats, to have their brains filled with the infallible knowledge of modern science.  Truth is based on the authority of teachers and textbooks, and students on the golden path to success know better than to question authority.


“Modern societies in general, and education in particular, does more to stifle than to encourage intuitive thinking.”  Modern science is often hierarchical, elitist, and less accessible to non-specialist commoners.  On the Kalahari, tracking science is informal and accessible to everyone.  A youth can disagree with how an experienced elder has interpreted tracks, and suggest a different conclusion.  From childhood, youths are regularly exposed to the scientific process.


Modern human brains are probably little different from those of early Homo sapiens.  Liebenberg believes that “some trackers in the past probably were, and perhaps today are, just as ingenious as the most ingenious modern mathematicians and physicists.”  At the same time, both trackers and physicists are capable of being stunningly irrational.  “Cultures may go into decline when scientific knowledge is undermined by irrational belief systems.”


We believe that our industrial civilization is too smart to collapse, perpetual growth is possible, innovation will create “clean” sources of abundant energy, climate change can be reversed, eleven billion can be fed, and the best is yet to come.  He warns us that, “Political leaders who hold irrational and superstitious beliefs, and may even be anti-science, clearly may have serious negative implications for human welfare.”  (Gulp!)


The goal of this book is to argue that science began with prehistoric bipedal trackers.  I wonder if scientific processes aren’t even older than bipedal primates.  Who taught our ancestors the art of hunting — locating prey by scent, sight, sounds, tracks, and knowledge of prey behavior?  Who taught us concealment, stalking, silent movement, deception, ambush, and approaching prey from downwind?  Lions don’t sit in the grass with their mouths open, waiting for breakfast to prance in.  They survive because they have teamwork and powerful minds.  “The /Gwi believe that some species possess knowledge that transcends that of humans.”  In Alaska, the Koyukon proverb is, “Every animal knows way more than you do.”


On the Kalahari, the traditional wild culture is being driven to extinction by growing contact with you-know-who.  Herders are moving in, fencing off lands.  In the 1960s, hunters began using dogs.  Much more game was killed, but the tracking skills of the hunters declined.  More recently, horses have also been added.  The diabolical trio of hunters, horses, and dogs makes it much easier to overhunt and deplete wildlife populations.  Far less skill is needed.  Younger generations have shifted to making souvenirs for tourists, as their ancient culture is pounded against the rocks.


Liebenberg is working with Kalahari elders to encourage younger folks to learn tracking, in hopes that skilled trackers can gain employment collecting wildlife data for use in scientific research.  He has created CyberTracker, a smart phone app that can be used to collect data in the field.  The interface is icon-based, so it can be used by illiterate people.  It is now being used in research around the world, and is helpful in documenting ecological trends, like the welfare of endangered species.  It also encourages the survival and preservation of the art of tracking.

Had a discussion (one sided) on one of my mailing list about our science ability origin. Their position was myopic about our ancestors incredible abilities. If the hunter didn't use the "scientific method" it wasn't science. Amazing - the ignorance.
Another good one.
As an aside/new search - what is "civilization"?

<< If the hunter didn't use the "scientific method" it wasn't science. >>

I have a feeling that the ancestors learned basic reasoning processes from the other animals of tropical Africa. Our culture of human superiority narrows our focus to a pinhole. Spending nine winters on the Keweenaw Peninsula, I was amazed that the foxes, hares, grouse, squirrels, deer, and chickadees could spend all winter outdoors, without fire or manufactured clothing. I couldn’t — and I had a college degree, too! I’m a tropical primate.

Oxford English Dictionary sez: A state or condition of being civilized; human cultural, social, and intellectual development when considered to be advanced and progressive in nature.

I don’t have time to spend an hour on this. It’s about the domestication of plants and animals, living in hierarchy, mining the soils and forests. Well, maybe not. Ants and bees do something like civilization, and do it without wrecking the ecosystem. Humans have been trying for a long time, and failing for a long time.

1. My opinion is reasoning (various levels) is the default state of all animals and belief is cultural.
2. Just like any other organ, we can use our brain for purposes other than it was constructed. (Gould's exaptation).

Hi Amarnath! Thanks for teaching me a new word! Exaptation.

In January 2013, I heard John Trudell speak at the University of Oregon. Here’s a snip from my notes:

The grand dreams of the Boomers failed. There was a lot of energy in the Sixties. We were the majority, but we didn’t have the power. We “believed” our way into this mess — we weren’t thinking. Belief deactivates your ability to think. At many points in history, those who refused to believe got rubbed out. Don’t believe anything I say — think. See if what I say makes sense. When we think our brains emit electro-magnetic energy into the universe, and this is a form of good power.

Yes u r right . we believed into the destruction of what western civics is based on. We lost the foundations